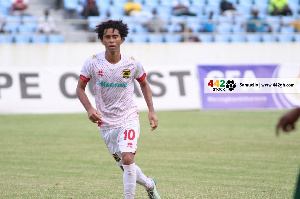 Gama, who made his Premier League debut against Medeama has established himself as a key member of the Kotoko squad.

The former Brazil U-17 star had an impressive performance against Liberty Professionals where he setup Kwame Poku’s second goal.

However, according to the former Karela United gaffer it is about time referees shield Gama as he strongly believes he is yet to get used to the Ghanaian style of football.

“Opponents have been fouling Fabio Gama. He has suffered too many times and I will plead with referees to protect him”

“He is yet to get used to the Ghanaian style of football. He’s not strong enough” he said.