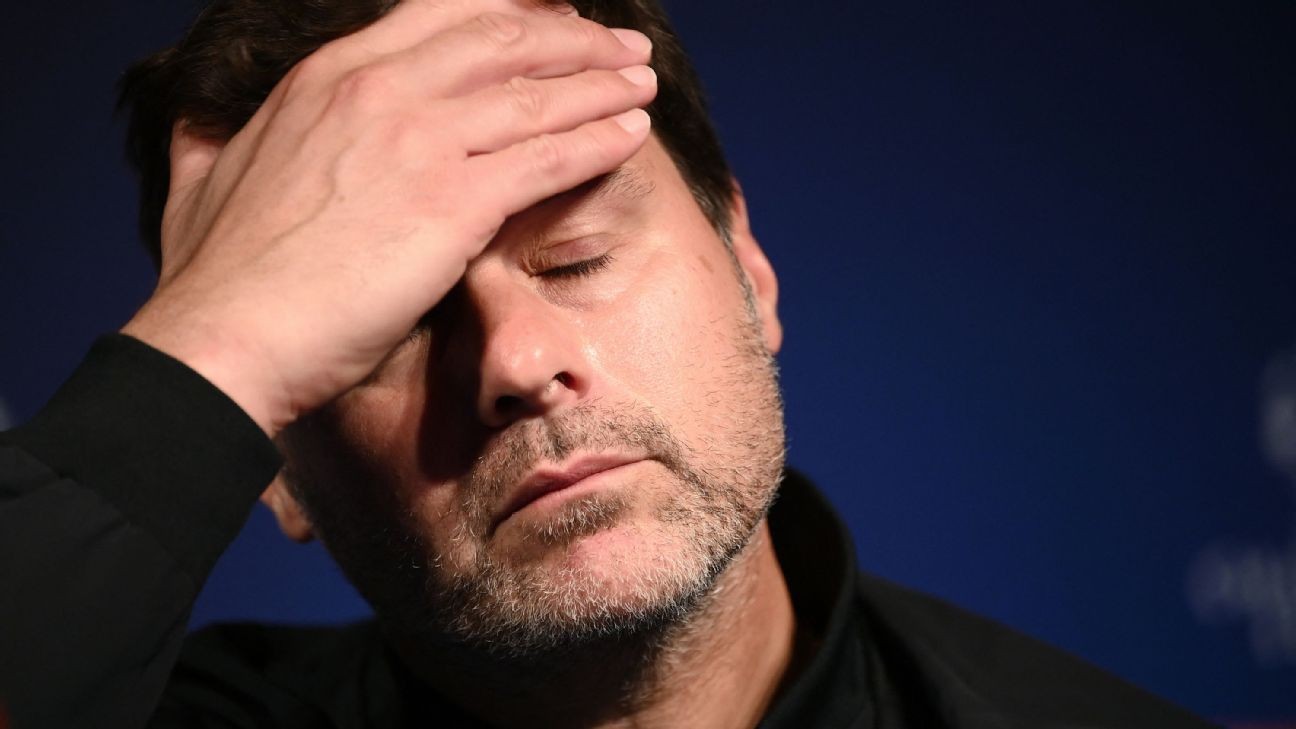 It seems incredible, but the story is already over. Eighteen months after his arrival at Paris Saint-Germain as a very ambitious manager, and fully 20 years after serving as club captain, Mauricio Pochettino's second spell in Paris has come to an end. ESPN sources revealed last week that he is to be sacked only a few weeks after lifting the Ligue 1 trophy.

The "retrouvailles" (reunion) never worked out and his tenure will forever carry that awful feeling of "what could have been." Too many issues turned a beautiful, romantic time into a difficult and at times uncomfortable marriage. Where does everyone involved go from here?

What went wrong? Away form, lack of authority, Messi tension

To succeed in Paris, you have to be a very good manager, which certainly applies to Pochettino, but you also have to be a capable communicator, which is not his forte. Your team has to play well, too. It's not just about winning, but winning with style, which was also not the case throughout his time at the Parc des Princes.

Above all of those on-field concerns, you also need to be deft at dealing with all the politics within the club, which is arguably where he fell most short.

With the Emir of Qatar, Sheikh Tamim bin Hamad Al Thani, as the owner and Nasser al-Khelaifi an absentee club president, the many decision-makers serve as interfering forces. There are a lot of people to satisfy and a lot of expectations to meet. With that comes the natural pressure of such a big club, with the dressing room also feeling at times like a nest of vipers.

Pochettino struggled in this environment, as have other PSG managers (notably Unai Emery and Thomas Tuchel) before him. He didn't have a good relationship with former sporting director Leonardo, either. With their roles at the club, their rapport needed be rock solid, but Pochettino was chosen by the emir, not Leonardo, and the pair never really got on. At the heart of the matter, they were an Argentine and a Brazilian who viewed football very differently.

One of the biggest reasons for such tension is that Pochettino never felt like he had full authority over his dressing room. There were times when he wanted to take strong action after a first-team player (the same one in both incidents) didn't respect the rules. Both times, he was told to leave it. It is hard to manage any team if you don't have that authority, even more so inside this PSG dressing room.

Is big spending back? What we can expect from the transfer window4dTor-Kristian KarlsenMessi's next move: Back to Barca? Try Premier League, MLS? Stay at PSG?10dESPNInside Story: Why, and when, Mbappe chose PSG over Real Madrid27dESPN.com

They also rarely played attractive football with a clear tactical direction, with the humiliating defeat at the Bernabeu against Real Madrid in the Champions League round of 16 (when they led 2-0 on aggregate with 30 minutes to play and lost 3-2), and the total passivity of the manager in the face of adversity that night, drastically diminishing Pochettino's standing at the club. Being knocked out of the Coupe de France, a competition Paris had won the previous five years in a row, by Nice at the Parc des Princes in the last 16 was poor too, as was the defeat against Lille in the Trophee des Champions, the French Super Cup.

There was also the incredibly poor away record. PSG didn't win on the road at any of the top nine teams in Ligue 1 last season, losing at Monaco, Stade Rennais, Nantes and Nice while drawing at Marseille, Lyon, Lens and Strasbourg. With a squad filled with superstars like Lionel Messi, Neymar and Mbappe, that is simply not good enough.

Who's next for PSG: Galtier or Zidane?

After the Mbappe saga, which ended with the France star signing a new deal, the drama around who will succeed Pochettino in the dugout will keep PSG fans and followers busy.

Right now, there are two candidates: Zinedine Zidane and Christophe Galtier. Zidane, who turns 50 on Thursday, is the absolute dream hire for the emir of Qatar. The former France and Real Madrid star ticks all the boxes and is the best candidate for the job. However, he still has not agreed to join the club. He has his eyes on the France job, which could be available in December after the World Cup, and he's well aware that the project in Paris is tough, as managers often disappoint.

Mauricio Pochettino was unable to navigate the politics of PSG or control a star-studded dressing room. FRANCK FIFE/AFP via Getty Images

At the moment, it's unlikely that it will be him, but until he gives a definitive "no," there is still hope inside the club that he will take the role. After all, Zidane is Zidane: he has three Champions League triumphs in a row (2016, 2017, 2018) and two LaLiga titles (2017 and 2020) with Madrid, not to mention he boasts so much charisma and the ability to keep any poisonous dressing room happy.

The other option is Galtier, 55, who won the French title with Lille in 2021 and is very close to PSG's new sporting director, Luis Campos. He's also desperate for the job, according to reports, and has already spoken to Campos about taking over. He is one of the best French managers out there despite a slightly disappointing season at Nice, finishing fifth on goal difference and dropping from the Europa League to the Europa Conference League as a result.

The two clubs have not started discussions over a transfer yet, but Nice are reportedly OK with him leaving and an agreement shouldn't take too long to negotiate. Galtier doesn't possess the popularity or the pedigree of Zidane, of course, but he is hard-working and focused, with great man-management skills, though his playing style (with a "basic" 4-4-2) could be an issue for PSG fans.

Where does Pochettino goes from here?STREAM ESPN FC DAILY ON ESPN+

After the humiliation in France, Pochettino wants to go back to England. He's currently in London, where his wife stayed during his time in Paris. One of his sons, Sebastiano, was the fitness coach in his PSG staff and is to be sacked as well, while the other, Maurizio, was recently playing for Watford, but was released when the Hornets were relegated from the Premier League.

The ideal for the Pochettinos is that Mauricio finds a club in the Premier League. He dreamed of getting a chance at Manchester United, but they chose Ajax's Erik ten Hag instead. It leaves few other options at the top end of the table as all of the Big Six now have stability on the sidelines.

Would he accept a lesser club like a Leicester City or a Newcastle United if either job became available? It will depend of the offer and the project, but why not? Will he wait for Antonio Conte to leave Tottenham Hotspur so he can try to make a sensational return? That is unlikely at the moment.

What about in the rest of Europe? Spain is a strong possibility, as his reputation there is still high. In the past, he met and spoke with Real Madrid president Florentino Perez many times. They know each other well, and for the post-Carlo Ancelotti era, Pochettino's name would definitely be on the table if he were still looking for a job. The difficult time at PSG didn't tarnish his image, but it didn't enhance it either.

Pochettino will get some really good offers in the near future. Will they come as early as this summer? He will have to wait and see.