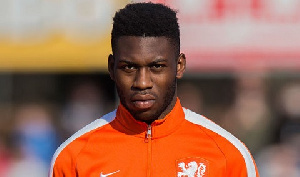 Dutch-born Ghanaian defender Timothy Fosu-Mensah has kicked against racism in world football, saying it should not be allowed anyway.

Racism against black players has become a global pandemic with FIFA struggling to get rid of the canker.

The former Manchester United right-back despite not suffering any form of racism as a black player has seen racist act.

However, according to him, racism should not be allowed into the game and backed players to walk off the pitch when racially abused in matches.

“To be fair, personally I have not faced racism, I have seen racist things but I have not felt it. We are all human being and so if someone try to be racist is for him” he told Happy FM.

Asked he support players to walk off the pitch when abused racially during matches, he said, “Yes, everybody is different but I think it has more effect on person than all the players but racism should not be allowed anyway”

The Dutch-born is currently in Ghana for holidays after a long season with Bayer Leverkusen.

He arrived in Ghana for the first time in 16 years, having spent most of his life in Europe.