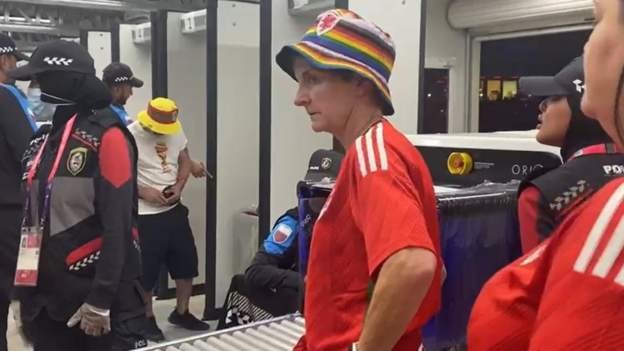 The Football Association of Wales (FAW) says Fifa has told World Cup venues to let rainbow-coloured hats and flags into stadiums for the remainder of the Qatar tournament.

The FAW says Fifa, football's world governing body, has confirmed rainbow-coloured items will be allowed at Wales' game against Iran on Friday.

The Welsh governing body also says all 2022 World Cup venues have been told to follow "agreed rules and regulations".

Former Wales captain Laura McAllister said she felt intimidated having been told to remove her bucket hat when entering the stadium to watch Wales' 1-1 draw with the United States on Monday.

McAllister was wearing a hat representing the Rainbow Wall, the supporters' group for Welsh fans who are members of the LGBTQ+ community,

The FAW said it was "extremely disappointed" by reports that supporters and some members of its staff had been asked to remove and discard Rainbow Wall bucket hats before entry to the Ahmad Bin Ali Stadium.

The FAW said it contacted Fifa following the incidents at the USA game.

In a statement released on social media on Thursday - ahead of Wales' game against Iran on Friday (10:00 GMT) - the Welsh association said: "In response to the FAW, Fifa has confirmed that fans with Rainbow Wall bucket hats and rainbow flags will be allowed entry to the stadium for Cymru's match against Iran on Friday.

"All World Cup venues have been contacted and instructed to follow the agreed rules and regulations."

Qatar has been criticised for its stance on same-sex relationships, human rights record and treatment of migrant workers.

Since the World Cup began, there has been controversy about fans - and journalists - being prevented from wearing rainbow-coloured clothing at matches.

Seven competing teams were forced to abandon plans for their captains to wear the OneLove armband, which was to promote diversity and inclusion, at the tournament.

The players did not wear the armbands because Fifa indicated they may receive yellow cards for doing so, leaving Wales "furious".

FAW chief executive Noel Mooney said assurances that rainbow-coloured items will now be permitted have to be taken "at face value".

He added: "We had written to Fifa and asked for assurances and had assurances that the stadium are on board.

"We have to take it at face value that nobody will have a problem tomorrow. If anyone has hats confiscated tomorrow, we will escalate it."

The decision to block the OneLove armband prompted Germany players covered their mouths during the team photograph before their World Cup opener against Japan.

Manager Hansi Flick said it was "to convey the message that Fifa is silencing" teams.

Germany's football association, the DFB, also says it is investigating whether Fifa's threat to sanction players for wearing the armband is legal.

McAllister, the former Sport Wales chair and Fifa council candidate, is gay and said the security at the stadium was "heavy handed. It was quite intimidating".

A professor at Cardiff University's School of Law and Politics, McAllister is also currently board director at the Football Association of Wales Trust and deputy chair of Uefa's Women's Football Committee.