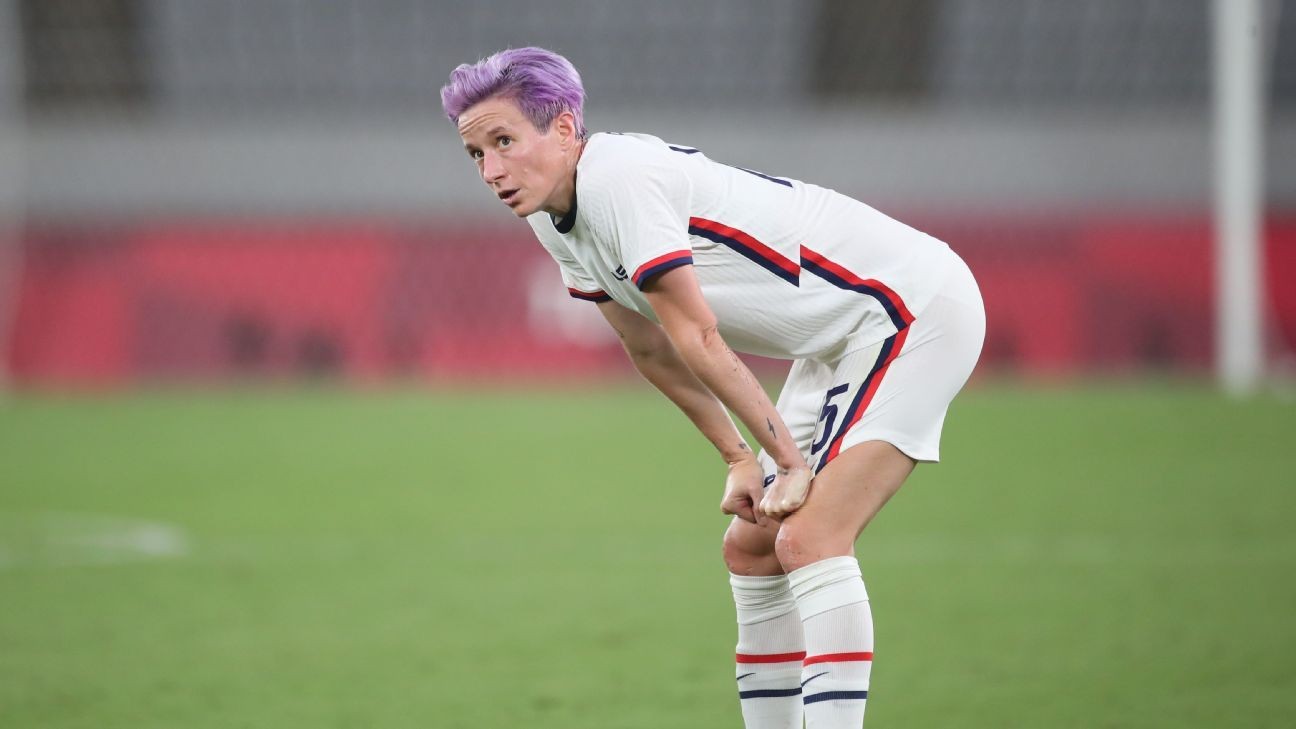 Megan Rapinoe is aware of the elephant in the room.

She turns 37 soon and she has started only one game for OL Reign this season in the National Women's Soccer League season due to injuries. Still, U.S. women's national team head coach Vlatko Andonovski selected her for the 23-player roster for the upcoming World Cup qualifying tournament, which starts July 4, one day before her birthday.

Rapinoe -- both she and Andonovski say -- will play a very different role from the one that the world is accustomed to seeing her in.

"We have a really young squad," Rapinoe told ESPN, "and I feel like what I can bring to them in a mentor role, at training, being in their ear, the level of professionalism and understanding the style that Vlatko wants to play, and [being] that conduit to what the coaching staff wants and what the players are going to ultimately do on the field, was part of the roster selection.

Why NWSL's 2022 rookies are the best the league has ever had6dJeff KassoufRose Lavelle and the freedom to be herself: How her OL Reign, USWNT form has taken off15dJeff KassoufHow the USWNT and USMNT achieved equal pay, rewrote history35dJeff Carlisle

Most of the world knows Rapinoe for her role as the leader of the United States' triumph at the 2019 Women's World Cup. With her unmistakable pink hair, Rapinoe won the Golden Ball and Golden Boot as the top player and scorer while the U.S. clinched a second straight World Cup title, all while fighting the U.S. Soccer Federation for equal pay and protesting against the Trump administration.

After that magical month in France, Rapinoe says now, she felt stuck in a "hamster wheel." Her life changed completely as her celebrity increased, and she found herself struggling to balance the emotional, mental and spiritual aspects with the usual physical demands made harder as she aged. The Olympics were delayed a year until 2021, and the U.S. eventually slogged through some poor stretches of play at that tournament to win a bronze medal. Rapinoe scored twice in the 4-3 win over Australia in that third-place game.

Megan Rapinoe is at a crossroads in her career, and she is fully embracing her new role for the USWNT despite what critics might think. Tim Clayton/Getty Images

Then came the break. Beginning in November, Andonovski purposely left out longtime veteran national team players -- including Rapinoe -- from training camps. His plan was to get a better look at young, less experienced players in order to determine whether they could contribute to more important moments like qualifying and, ultimately, the World Cup. Andonovski revealed earlier this month that he and Rapinoe had a discussion in late 2021 about her eventual return to the team.

"With that conversation, she understood that we are going to bring in a lot of players, we are going to test a lot of players," Andonovski said. "We want to give the young players lots of minutes and opportunities to play and give us a chance to evaluate as much as possible. But after everything is said and done, if she is healthy and if she is fit to get minutes, that she will be on the roster. We know what Megan is capable of doing."

From thoughts of retirement to reinvigoration

At some point during qualifying, Andonovski says, younger U.S. players will need Rapinoe's experience to navigate a difficult situation. Rapinoe was around for qualifying in 2010 -- the previous time Mexico hosted the tournament -- when the U.S. lost to Mexico in the semifinals and had to eke through a playoff with Italy to become the final team to qualify for the 2011 World Cup. It was the closest the U.S. women's national team had ever gotten to not qualifying for a World Cup.

Several veterans from that near disaster remain active. Rapinoe said that no two players' situations are the same, and that people very generally grouped veterans together over the past nine months of this roster overhaul process. (Alex Morgan also returns to the squad for qualifying. She leads the NWSL with 11 goals in 10 games.) Everyone who got called up deserves to be, Rapinoe said, and even players who did not get the call deserved inclusion, too.

"Rosters are not a compilation just of, go pick the best players and hope for the best," Rapinoe said. "It's about constructing an organism that works together on and off the field, that works not necessarily harmoniously all the time, but that the right pieces fit for certain reasons and for reasons most people don't understand."

Vlatko Andonovski has coached Megan Rapinoe at both her NWSL club, OL Reign, and for the USWNT. Brad Smith/Getty Images

Injuries played a role in the public skepticism of Rapinoe's return to the national team. A day after feeling like she completely recovered from a nagging ankle injury this spring, she pulled her calf muscle. Her return to the field for OL Reign, something she needed to do to show she was fit for national team selection, was then delayed.

Personal frustrations mounted for Rapinoe during that time, she says, so much so that sometimes retirement became a thought of hers -- not because it was what she wanted to do, but because it felt like the only way to break the cycle. Rapinoe credits her fiancée, Sue Bird -- who announced last week that she would retire at the end of this WNBA season, her 21st -- with helping her manage those feelings as someone going through a similar process. Those are thoughts of the past, Rapinoe says.

As U.S. national team training camp convenes in Colorado this week ahead of World Cup qualifying, Rapinoe said she's in a much better place now. The outside world saw some of her physical struggles as she tried to get back on the field this spring, but they did not see her daily, internal battles with herself.

"I feel like I'm just now on the other side of healing, physically and emotionally, and getting to a place where this feels new," Rapinoe said. "Because I couldn't have done what I was just kind of continuing to do after 2019. That felt like a hamster wheel, and it didn't feel like a choice, and now I feel like I'm actually making a choice. My role is different, and I think I understand what my role is and I'm comfortable with it -- I'm really excited about that. It's kind of a combination of those things where I feel like in the last couple of weeks, I feel like a weight has been lifted. But also, I'm like, 'Oh my God, I'm excited again.' "

Beyond leadership, Rapinoe still has an uncanny ability to change results on a dime by being unpredictable from both open play and set pieces. She is also just reliable, and that matters to coaches in pressure-filled situations. As Reign head coach Laura Harvey said in May, "I would put my mortgage on Megan Rapinoe to score a penalty."

Harvey and Andonovski played significant roles in Rapinoe's career arc. The affable winger is best known for her triumphs at the world stage, but Rapinoe credits the evolution of her game -- one that helped the Americans win both the 2015 and 2019 World Cups -- to her time with the Seattle-based club, and specifically Harvey and Andonovski, who have both served as her coaches at the Reign.

"I feel like I owe so much of my national team career to the Reign," Rapinoe said. "I've had two of the best, if not the best coaches in the world, coach here and to be able to play under them. Some of the best players in the world [were here]... I feel like it's where my game grew up. I think up until I got here it was like, 'Yeah, I'm talented, I'm on the national team, we're doing stuff, we're successful.' But I feel like when I got here, my game changed completely, and I really took it to the next level. I just owe so much to this club."

Andonovski coached the Reign prior to taking over the national team job and in that role he insisted that Rapinoe could still be better by improving her crossing accuracy and influencing the game in small moments, like a quick throw-in to catch an opponent off guard. He said that one year before Rapinoe dominated the 2019 World Cup.

Harvey was the original coach of the team -- then called the Seattle Reign prior to being bought by the owners of Olympique Lyonnais -- and she oversaw arguably the most dominant team in NWSL history in 2014 and 2015. The Reign went 16 games unbeaten in 2014 on their way to the first of two consecutive NWSL Shields, but they lost the NWSL championship each year to Andonovski-coached FC Kansas City sides.

Ten years into the NWSL and many great Reign teams later, a playoff championship trophy still eludes the franchise. Rapinoe is one of three original Reign players to have been with the team from the inaugural season in 2013 (among 21 who remain active leaguewide from that first season). Jess Fishlock is one of the others, and while she was the league MVP in 2021, she will turn 36 before next season. Add that context to the short-term loan acquisition of Kim Little -- who was the engine of those Reign glory teams and the 2014 league MVP -- and the arrivals of Tobin Heath and striker Jordyn Huitema, and it suggests the Reign are all-in on finally ending the drought this year.

"I'm really motivated and focused to bring a title to a club that I feel like really deserves it and has done things the right way," Rapinoe said. "I feel like [we play] a style of soccer that has been inspirational not only here but around the world."

Before she returns to the Reign for the stretch run of the NWSL season, Rapinoe will help guide a very different-looking U.S. team at World Cup qualifying in Mexico. Four automatic qualification berths from the region lower the stakes a bit, but only the winner of the CONCACAF W Championship tournament will earn an automatic berth to the 2024 Olympics. (Second and third place go to a playoff.)

Rapinoe's inclusion in World Cup qualifying both reinvigorated her and provided clarity for her path ahead. If Rapinoe is to play in a fourth World Cup next year, it will have to be in a much different capacity than the previous cycles. She is at peace with that, so long as it is the best path for the team.

"Now, I can imagine myself in qualifiers," Rapinoe said. "Now, I can imagine, potentially, what a run to a World Cup would look like and what's going to be required of me, where I feel comfortable and where I can push myself, where I can be of the utmost help to the team. Ultimately, that's what it's about. It's about winning, period. It's about getting another championship and going for a three-peat, which is f---ing ridiculous and amazing. If I can be a part of that, that excites me."