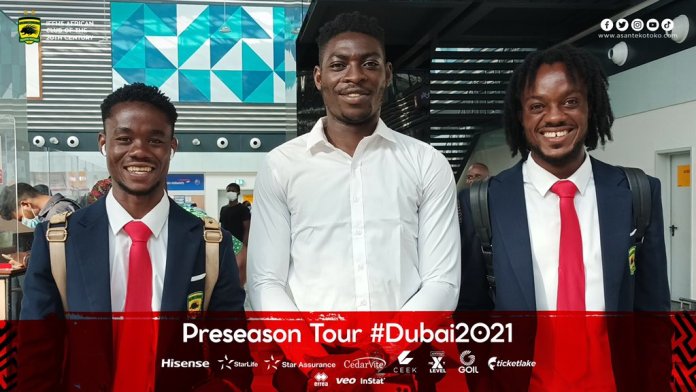 Asante Kotoko goalkeeper Razak Abalora and some of his teammates have safely arrived in Dubai to join their teammates for the pre-season tour.

The club on Friday announced that seven players have been left behind due to visa issues.

However, the club on Saturday morning confirmed that th club's deputy captain together with new signings Richmond Lamptey and Joseph Amoako who joined from Inter Allies and Young Red Bulls Academy have teamed up with the rest of the players.

However, there are still other players yet to join the team. They are expected to travel later today.

They include former Berekum Chelsea captain Stephen Amankonah who signed a three-year deal with the club is expected to officially announce his acquisition before he joins his new teammates in Dubai.

The others include strikers Solomon Sarfo Taylor and Andy Kumi Francis as well as Samuel Boateng and Augustine Agyapong.

The Porcupine Warriors under Prosper Nartey Ogum are expected to spend two weeks in the Gulf region to fine-tune before they return for the commencement of 2021/22 Ghana Premier League season.

Their first game of the season will be an away trip to Dawu where they will lock horns with Dreams FC before they host Bechem United at the Baba Yara Sports Stadium a week later.