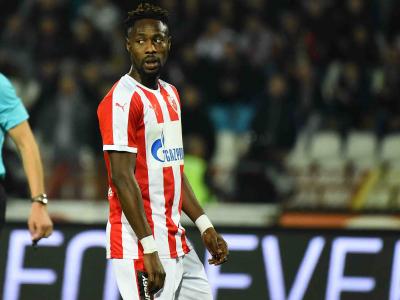 Ghana and Red Star Belgrade striker Richmond Boakye-Yiadom is expected to miss his side's clash against Tottenham Hotspur in the UEFA Champions League on Tuesday evening.

The 26-year-old did not travel London for the third Champions league group stage game against Spurs due to an injury he suffered during a training session on Thursday.

The extent of his injury is yet to be known but manager Vladan Milojevic  is confident he has a good squad for the game in England.

"When someone is gone, then the potential for us is missing. Personally, I don't think so, because I have confidence in all my football players. Pavlik, now Boakye, was injured against Olympiakos, but that is something we have to deal with," says manager Vladan

Red Star Belgrade have won their last five matches in the Serbian SuperLiga.

The Serbian giants will be seeking to beat Spurs at their own back yard after coming from behind to beat Olympiacos 3-1 in the last group fixture .