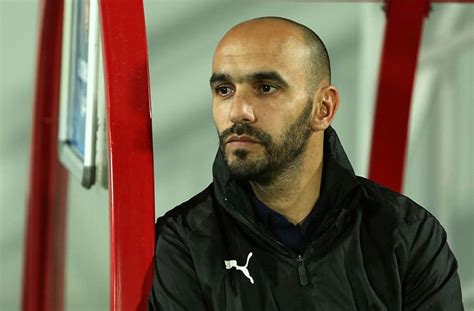 A big dilemma is facing the ambitions of Wydad Casablanca coach Walid Rekraki, in his first appearance as the team's technical crossbar in the African Champions League.

Wydad will start the current season 2021-2022 edition of the continental competition with a difficult confrontation against the Ghanaian Hearts of Oak champion.

Wydad Casablanca, led by Rekeraki, will visit the Ghanaian team on October 17, in the first leg of the 32nd round of the continental competition.

Regraki asked the club's president to intervene with the Moroccan Football Association in order to dismiss 6 of its players who are currently in the camp of the Moroccan national team under the supervision of Hussein Amota, and he will play a third friendly tomorrow, Tuesday.

Rakeraki demanded that his players be returned before Tuesday so that they could play the last training with him before heading to Ghana. According to Koora the trip would take place on Wednesday night and would take 5 hours.

Regraki has also been missing for 10 days the services of Tanzanian Simon Msova, Libyan Muayyad Al-Lafi and Congolese Gay Mbenza who are with their national teams for the World Cup qualifiers, knowing that Mbenza is not on the African list.

In addition to these, Ayoub Amoud is in the Al-Aswad camp, with injuries that will exclude Hamza Hamoud, Taha Mourid, and Septin Karkash, in addition to Salah Al-Din bin Yesho, who is undergoing a period of recovery after the surgery he underwent.