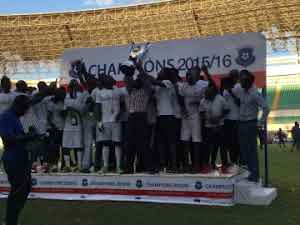 Information gathered by Footballghana.com can exclusively confirm that the 2016 Ghana Premier League Champions, Wa All Stars have been offered out for sale following the inability of former GFA President Kwasi Nyantakyi to be associated with football activities.

We also understand that negotiations between both parties has being ongoing for sometime now.

However, taking over from the Mr. Nyantakyi is at a peak waiting for an official announcement from the club.

WA All Stars made their debut in the nation’s topflight in 2009 and have since maintained a spot in the league.

"For now what I can say is the club is on the verge of been sold". Negotiations between both parties has being in existence for sometime now".

"We will make official announcement as a club if taking over happens", the source told Footballghana.com

The WA based side is set to be owned by former Ghana international John Paintsil according to report.

Wa All Stars became the first club from the Northern part of the country to be crowned champions of the topflight.