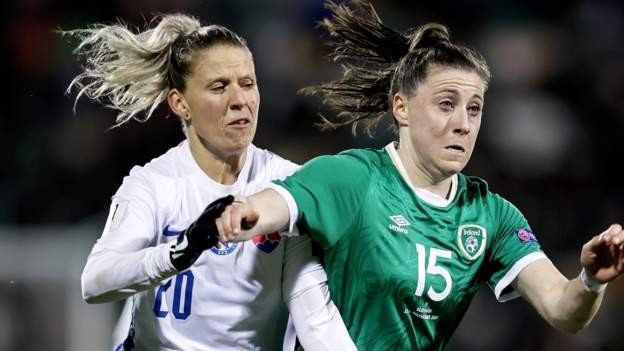 The Republic of Ireland were held to a 1-1 draw by Slovakia in their World Cup qualifier at Dublin's Tallaght Stadium.

The hosts fell behind to a Martina Surnovska goal soon after the break but Katie McCabe hit a superb equaliser midway through the second half.

Louise Quinn ensured the Republic won a point with an excellent goal-line clearance after a mistake by goalkeeper Courtney Brosnan.

The draw leaves Vera Pauw's side with four points from three qualifiers.

Having lost narrowly to Sweden and won away in Finland, the Republic are fourth in the table ahead of their meeting with Georgia on Tuesday - a game they will have to win to have a real chance of reaching the World Cup finals.

Leaders Sweden defeated Finland 2-1 in Thursday night's other game in Group A.

Slovakia, who now sit above the Republic in third on goal difference, went ahead in the 47th minute. Ľudmila Matavkova delivered an inviting cross after a good run down the right and Šurnovská was able to tuck it home at the back post.

Pauw's team responded well and grabbed their leveller in the 65th minute when Denise O'Sullivan found McCabe with a lay-off and the captain drilled a stinging left-foot shot into the bottom corner.

Megan Connolly had almost equalised seven minutes earlier when she caught a 25-yard shot well but visiting goalkeeper Mária Korenčiová dived to her left to save.

While the Republic went into the game hoping for three points, they had to rely on a goal-line clearance from Louise Quinn 15 minutes from time to ensure they picked up one point.

Poor control from goalkeeper Brosnan allowed the ball to drop to substitute Laura Žemberyová, whose shot was heading for the goal before Quinn got back superbly to scramble clear.

Lineups are announced and players are warming up.