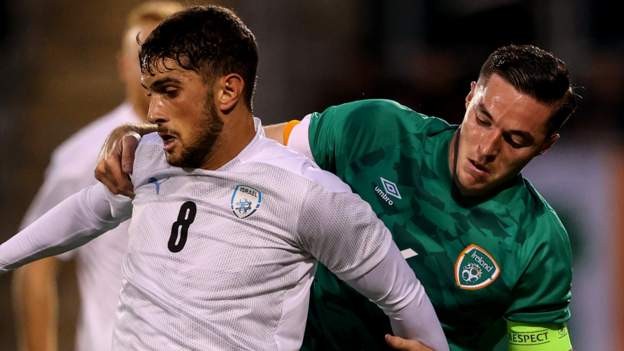 Evan Ferguson equalised for the Republic of Ireland

Republic of Ireland Under-21s fought back in the second half to secure a 1-1 draw against Israel in the first leg of the Euros play-off at Tallaght.

Idan Gorno put the visitors ahead on the stroke of half-time despite an authoritative half from the Irish.

The home side continued to threatened and levelled things up through Evan Ferguson on 64 minutes.

Stav Lemkin was sent off late on for Israel and will miss the finely-poised return leg in Tel Aviv next week.

Hoping to secure qualification for the European Championships for the first time at this level, the Republic got the grips with the visitors after a slow start.

Aaron Connolly, after eight senior caps, made his return to the U21 set-up after three years and was a constant menace throughout.

He went close twice in the opening 45 minutes while on-loan Stoke City midfielder Will Smallbone also forced a fine save from Daniel Peretz in the Israel goal.

Like the Irish, the visitors were hit by the absence of full internationals, none more so than Celtic's Liel Abada but the visitors still posed threat in behind.

It was the away side who took the lead on the stroke of half-time when Gorno got in between Joe Redmond and Brian Maher to steer home.

The Derry City keeper will perhaps felt he should have done better from the corner but Jim Crawford's side went in a goal down at the break.

They regrouped however, and after pipping Sweden to second in a competitive group behind Italy, began to turn the screw.

Connolly, now of Venezia, continued to look lively but the goal came through strike partner Ferguson.

His towering header from a Tyreik Wright corner on 64 minutes flew past Peretz to make it a goal apiece.

The boys in green pushed for a winner thereafter but Israel managed to stem the attacking tide.

Lemkin was sent off with 10 minutes to go as he upended Connolly, where the referee adjudged the foul to be just outside the box opposed to inside the area.

The sides will face off in the second leg in Tel Aviv on Tuesday evening.