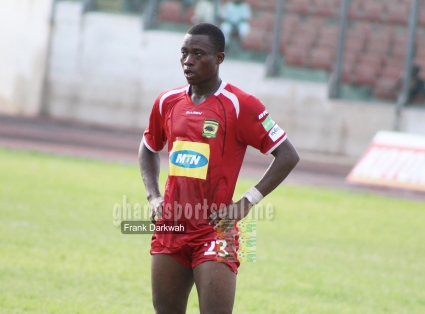 Medeama came from behind to beat Kotoko 2-1 in the game which was played at the Tarkwa T and A park on Wednesday.

Two second half penalties were converted by Medeama defender Paul Aidoo condemned the Porcupines to their first defeat in the Western Region in 27 years.

Kotoko's Nafiu, who was responsible for the second spot kick was visibly enraged by the referees' decision to award the kick to Medeama which led to a brief altercation between some of the Kotoko players and the referee.

Referee Issaka Afful then proceeded to issue a red card to the former King Faisal player for verbal assault.

Meanwhile, a member of the match officials on condition of anonymity, has revealed to SportsObama.com that Nafiu swore by the Antoa deity in damning the referee.

"He was not red-carded for the foul that led to the penalty but he rushed unto the referee cursed him, saying the referee will be killed by Antoa for awarding the penalty",

"In his opinion, he thought it wasn't a penalty but swearing at the referee was unpardonable and so my colleague had to apply the law", He said

Using an offensive or insulting or abusive language and or gestures at a referee or player is one of the seven sending off offences in the FIFA Laws.

When contacted, Kotoko's Nafiu refused to comment on the issue.

FIFA recently dealt a four-match ban to Lionel Messi after ruling that the Argentina forward verbally abused a match official in a World Cup qualifying game against Chile last week.