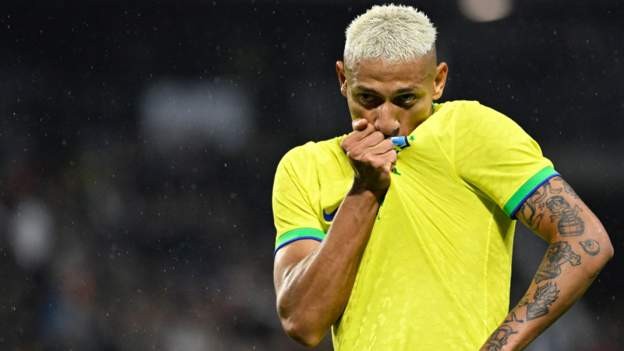 Richarlison has now scored 16 goals in 37 games for Brazil

Tottenham striker Richarlison scored a first-half double as Brazil brushed aside Ghana in a friendly.

The 25-year-old combined twice with Neymar, sweeping into the bottom corner from the edge of the area, before meeting a free-kick.

The former Everton forward led the line with Arsenal's Gabriel Jesus and Gabriel Martinelli not in the squad.

Paris St-Germain centre-back Marquinhos had given Brazil the lead, nodding home a ninth-minute corner from Raphinha.

There were also starts for Liverpool goalkeeper Allison, Chelsea defender Thiago Silva and Manchester United's Casemiro, while Liverpool's Fabinho came off the bench.

Tite's side face Tunisia on Tuesday as they build up to November and December's World Cup in Qatar, where they face Serbia, Switzerland and Cameroon in their group as they look to win a record-extending sixth title.

Elsewhere, Liverpool forward Mohamed Salah scored twice, including a penalty, as Egypt, who failed to qualify for the World Cup, beat Niger 3-0.

Matheus Cunha (Brazil) is shown the yellow card for a bad foul.

Joseph Wollacott (Ghana) wins a free kick in the defensive half.

Attempt blocked. Antony (Brazil) left footed shot from outside the box is blocked.

Marquinhos (Brazil) wins a free kick in the defensive half.

Attempt saved. Alex Telles (Brazil) left footed shot from outside the box is saved in the bottom right corner. Assisted by Neymar.

Rodrygo (Brazil) wins a free kick on the left wing.

Attempt missed. Tariq Lamptey (Ghana) right footed shot from the right side of the box is close, but misses the top right corner.

Attempt blocked. Iñaki Williams (Ghana) right footed shot from the right side of the box is blocked. Assisted by Daniel-Kofi Kyereh.

Attempt blocked. Bremer (Brazil) header from the centre of the box is blocked. Assisted by Antony with a cross.

Attempt saved. Rodrygo (Brazil) left footed shot from a difficult angle on the left is saved in the bottom right corner. Assisted by Neymar with a through ball.

Attempt missed. Neymar (Brazil) right footed shot from outside the box is too high.