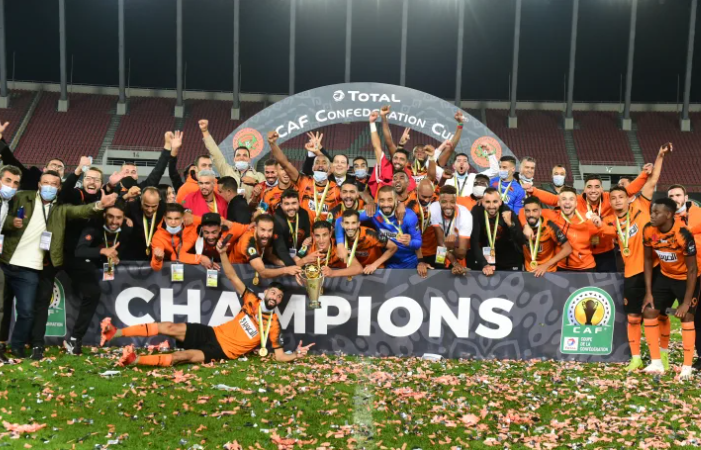 The ball ricocheted off the striker’s foot in the 15th minute, but it didn’t matter at all as it proved to be the golden goal, and perhaps the most important yet in Berkane’s history.

The Moroccans lost last year’s final on penalties to another Egyptian side, Zamalek SC, but they were in no mood of lighting striking on the same spot again as they ensured victory on home soil, seeing the atch played at Prince Moulay Abdellah in Rabat.

Berkane had to finish the game with 10 men, just like in last year’s final, when Bakre El Helali was sent off for a dangerous tackle with two minutes left on the clock.

Despite the numerical disadvantage, they just but managed to stay afloat.

Debutants Pyramids had come into the final with enviable pedigree, having gone all the way to the last game of the campaign in their first ever season with only two losses from their last 15 matches in the competition. They had also won all their eight away matches this season, prior to the final.

But, they could not finish the job as the experienced Moroccan side held on for valuable victory.

In a feisty opening half, Berkane opened the scoring after quarter of an hour when a shot from inside the box after a goalmouth scramble came off Iajour’s knee and into the net.

It was a rewarding start to RS Berkane as they had shown intent and hunger from the word go.

After just 14 seconds, they had knocked on the door with Iajour’s header off an Omar Namsaoui cross went wide.

The experienced forward had come close again in the seventh minute when he did well to protect the ball inside the box, but his shot was well saved by Pyramids keeper Mahdi Soliman.

But as the game wore on, so did the Egyptian debutants slowly begin to pile the pressure and pin Berkane in their own half. They did well to camp in the opponent’s side and had their first real go at goal in the 24th minute.

Some good build up play with swift short passing released a cross to Omar Gaber who in turn teed the ball up nicely for Mohamed Farouk, but his shot was just wide.

The forward asked the questions again with three minutes left to the break when he dribbled inside the box, but his eventual shot once again failed to trouble the keeper.

In the second half, Berkane started with as much gusto as they did the first and just two minutes in missed a golden chance. Off a good sprint on the right, Bakre El Helali cut back the ball for Iajour, but the forward skied the ball over.

Sensing that they needed to fix themselves quick, Pyramids made a change in the 56th minute, bringing in Ibrahim Hassan for Ayman Mansour. Hassan was part of the Zamalek squad that beat Berkane to the title last season and Pyramids hoped he would work the same magic.

Pyramids kept the pressure and had another opportunity in the 62nd minute, but Farouk’s nifty touch off an Abdalla Mohamed freekick but the effort hit the side netting. They made another change, John Antwi coming on for Ahmed Hassan.

The Ghanaian almost made an immediate impact with an angled header off a Farouk cross, but it went just wide.

On the other end, Berkane had a chance to finish off the game when Hamdi Laachir was picked out with a precise through pass, but he blasted the ball over.

Pyramids piled in the pressure as they sought to get just one to get themselves back into play.

They were handed a numerical advantage when El Helali was sent off for a dangerous tackle on Gaber. However, despite all last ditch efforts, they couldn’t rescue anything from the game.