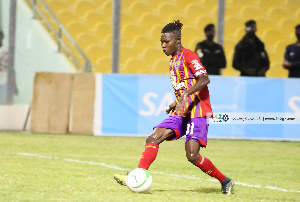 Enterprising Ghanaian winger Salifu Ibrahim has explained why he chose Hearts of Oak over Medeama.

The 21-year old who joined the Phobians before the start of the second half of the Ghana Premier League has hit the ground running winning three man of the match award since his arrival.

In an interview, the former Eleven Wonders marksman disclosed being contacted by Medeama but opted to join the rainbow boys.

However, according to him, Hearts of Oak is the club that can give him a bright future, hence his decision to snub Medeama.

“I decided that before the season end I have move on to a different level. Eleven Wonder is a Premier League team but it’s a small team so I decided to play for one of the tough teams at the end of the season” he said.

He continued that, “So when the season started i was winning the Man of the Match award so I received a call from Alhaji Akanbi of Hearts demanding for my service. I handed over to my manager and things went through”

“At the time Hearts were yearning for my services, Medeama too came but I decided to play for Hearts of Oak because I see it as a team that will give me a bright future” he added.