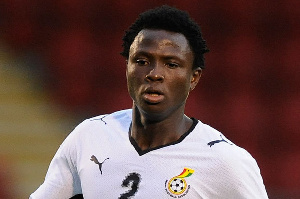 The former Black Stars player who pliers his tradr for Bulgarian First League Club Dunav Ruse said winning the trophy will propel them for bigger contracts in future.

Mumuni Shafiu’s hat-trick helped Maxwell Konadu’s men defeat Ivory Coast 3-1 to remain in the competition to defend the title they won on home soil two years ago in Cape Coast.

Inkoom said: “I’ll urge them to focus on the game. They can get big contracts that will be more than the bonus they will be given.

“We know that they need money to make ends meet but they should focus on winning the trophy and that will get them big contracts in future.”