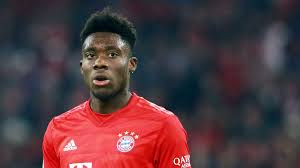 Davies, who plays as a left winger and left back for Bayern Munich, took Europe by storm this year with breathtaking performances on a consistent basis. The Canada international with Ghanaian roots have earned praises from fans around Europe for his blistering pace and efficiency.

In an interview on the Joy Sports Link on Saturday, Kuffour gave positive remarks on the 19 year old.

“There are some young ones who are coming in with good intentions like Alphonso Davies. [He is] amazing. He was born in Ghana here, in Bujumbura and for me I spoke to him when I was in Munich. He is a great kid. He understands what he is doing in the field of play," he told Nathaniel Attoh.

He also went into the subject of Bayern Munich's Champions League aspirations and he gave the Bavarians one more year to win the coveted trophy.

Kuffour won a lot of trophies with the German giants including the UEFA Champions League in 2001.