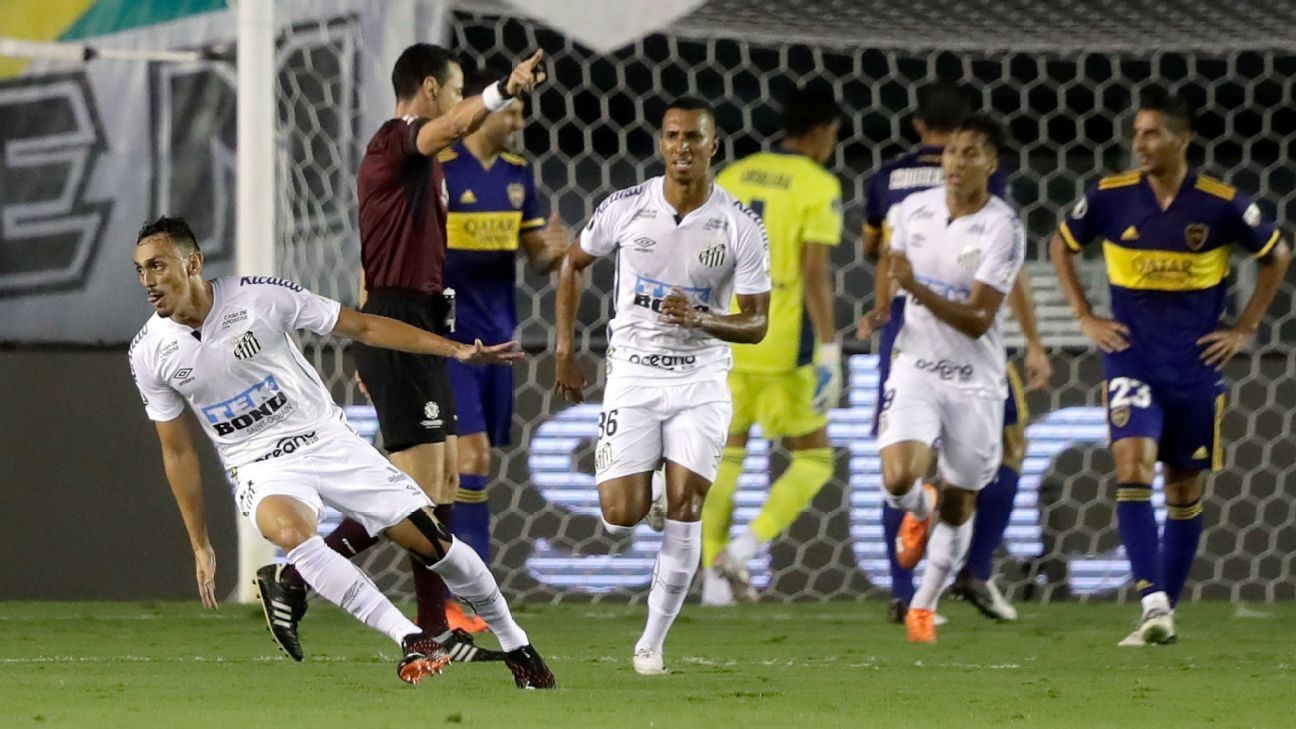 If Tuesday night in the Copa Libertadores was amazing, there is also an extraordinary story in Wednesday night's action.

Palmeiras crept into an all-Brazilian final, riding their luck to hold off a stirring second leg River Plate comeback. Santos, meanwhile, stormed the gates, seeing off Boca Juniors 3-0 on the night and on aggregate to give themselves the chance of a fourth Libertadores title -- something which few would have predicted a few weeks ago.

The club are broke, and have been banned from making new signings. The president was impeached for mismanagement, and relations between the players and the directors have been strained.There have been coronavirus outbreaks and injuries.

And yet, entirely on merit, they will be taking on Palmeiras on January 30th in Rio de Janeiro's Maracana stadium -- a spiritual home of the Pele generation who put Santos on the map in the 1960s.

The secret of Santos has been boldness at key moments. Coach Cuca remembers the 2018 campaign, which culminated in an all Buenos Aires River-Boca final.

Santos are into the Copa Libertadores final at the expense of Boca Juniors. Pool/2021Pool

One after one, the Brazilian teams -- including his own Santos in a previous spell -- were knocked out after showing an excess of caution. The 2020-21 team, forced to give youth a chance, have been aggressive with and without the ball. In the previous round they saw off compatriots Gremio with a fine display of midfield pressing, stepping up to disrupt the rhythm of Gremio's passing. Key to this is the pace of the centre back combination, Luan Peres and the excellent Lucas Verissimo, quick over the ground and safe on the ball.

Santos nearly lost both before meeting Boca. Luan Peres is on loan from Bruges in Belgium. His loan period ran out at the end of the year, and had to be hurriedly renegotiated. And Lucas Verissimo had been promised a move abroad. Terms were agreed with Benfica, who in the end proved willing to wait for him until February.

On this foundation stone Santos could build their attacks. There was a declaration of intent in the first minute, when right winger Marinho cut in onto his left foot and unleashed a trademark 'mini-missile,' which came back off the far post. Before long, though, they were ahead - and it had everything to do with the number of players they threw forward. Five were in the box when midfielder Diego Pituca scored. The ball was worked right to left, with Pituca playing on to little Venezuelan left winger Yeferson Soteldo.

His shot was blocked by a defender's arm. But before there was any time to argue about a penalty, Pituca pounced to hook home. Santos were ahead, but vulnerable. The away goals rule favoured Boca. A draw would take them through. A new phase of the game began, with Boca enjoying more possession - but not posing many problems.

Coach Miguel Angel Russo used halftime for a rethink. He made two changes, the more significant being the introduction of the dynamic Nico Capaldo in central midfield. But Santos, crucially, did not wait to see how the game would unfold. They pressed once more, marking on the front foot, looking to win the ball and break.

Three minutes after half time they forced an error on half way, and Soteldo cut in to whip a wonderful shot into the near top corner. Boca were still groggy when Marinho played a cut one-two with teenage centre forward Kaio Jorge and pulled back for Lucas Braga to turn in. And Boca were groggier still just afterwards when left back Frank Fabra gave vent to his frustration with a crude stamp on Marinho and was sent off. At half time the tie had looked intriguingly in the balance.

Within ten minutes of the restart it was effectively all over. A Boca defence which had let in just three goals in the 11 previous games of the campaign had been breached three more times in less than an hour. Boca did their best to chase the wind. But a comeback never looked likely -- which is especially sad for Boca's captain.

Carlos Tevez wanted so much to win the trophy to honour the memory of his great friend Diego Maradona. And there was plenty in the game to cause him to have memories of his own career. The breakthrough year for Tevez was 2003, when Boca switched him from a playmaker to a centre forward. It suited his virtues, brought the best out of him and helped Boca to win the Libertadores -- with a victory over Santos in the final, when Tevez was on target. Some seventeen and a half years later he was unable to give a repeat performance.

There is only ever one winner in the race between the athlete and time -- and so it is the youthful side of Santos who go through to the final.