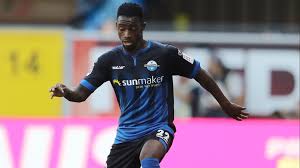 Ghana and SC Paderborn winger Christopher Antwi-Adjei is still eligible to play for Germany despite earning ca call-up into the Black Stars squad.

Antwi-Adjei is yet to make a competitive appearance for the Black Stars, hence he is free to represent Germany.

The 22-year-old was handed a Black Stars call-up by coach Kwesi Appiah for the 2021 Africa Cup of Nations qualifiers against South Africa and Sao Tome Principe but passport issues delayed his arrival for the first match against Bafana Bafana in Cape Coast on Thursday.

He arrived on match day and was not included in the squad for game.

He has only Sao Tome and Principe to make his competitive debut else he is eligible to make an appearance for the Germany national team when handed a call-up.

The highly-rated youngster has made 13 appearances for SC Paderborn in the Bundesliga and has been one of the standout players for the club so far this season.