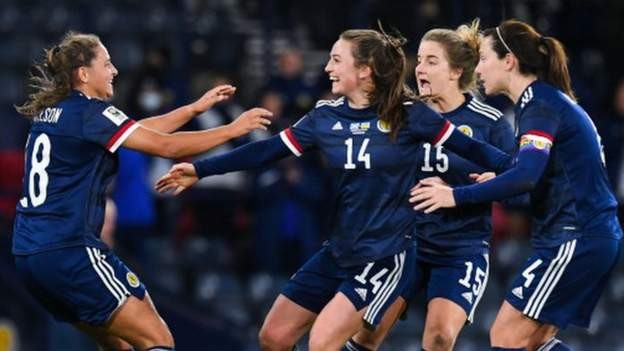 Scotland scored a last-gasp goal for the second World Cup qualifier in a row as Abi Harrison's header salvaged a draw against Ukraine at Hampden.

Roksolana Kravchuk slotted home in the first half and Scotland's 100% start looked over in a below-par display.

But Harrison stooped to head in Lana Clelland's cross with virtually the last play to snatch a point.

It means Scotland trail Group B leaders Spain - who they play on Tuesday - by two points.

Ukraine remain six points behind Pedro Martinez Losa's side, who stay second having played a game more than their opponents. A second-place finish is enough for a play-off berth.

The visitors are ranked nine places below Scotland and are their main rivals for the runners-up spot in the group, with Spain in ominous form at the summit.

Ukraine's new manager Lluis Cortes led Barcelona to the Champions League title last season and his early impact was clear as the visitors were well organised and direct on the break.

Scotland did not heed early warnings and were punished when Caroline Weir was caught in midfield and one pass split their defence to allow Kravchuk to calmly finish past Lee Alexander.

It was a sickening blow, but the home side warmed to their task in the final 15 minutes of the first half, and Harrison had two chances, but could not guide two shots beyond the assured Daryna Bondarchuk in goal.

Scotland cranked up the pressure after the break in pursuit of precious points, with Harrison heading onto the roof of the net, Weir forcing another terrific save, and Erin Cuthbert almost teeing up Christy Grimshaw for a tap-in, all in the first 15 minutes of the second half.

Captain Rachel Corsie was also denied a penalty as she was challenged when about to shoot inside the box, but referee Sabina Bolic felt the defender had connected with the ball first.

Scotland continued the relentless pressure, but repeatedly struggled to pick out a team-mate when getting to the byline and sometimes overplayed when a shot was on.

And they had goalkeeper Lee Alexander to thank late on for a fantastic close-range save to keep the score at 1-0 as Ukraine countered, before salvaging the game in stoppage-time.

Clelland did well to pounce on a sloppy clearance at the back post and she composed herself before flashing the ball to Harrison to finish from close-range with a flicked header.

Player of the match - Daryna BondarchukThe Ukraine goalkeeper made four good saves to preserve her side's lead and was unfortunate to concede in the endWhat did we learn?

Scotland are having some teething problems adapting to Martinez Losa's possession-based style. In the first half, Ukraine pressed them effectively up the pitch and crowded out their midfield when the ball did come through.

Chloe Arthur was playing at left-back, despite being right footed, which meant she often cut in and denied Scotland width. Their vulnerability was perfectly encapsulated in Ukraine's goal when they coughed up the ball in midfield and were ruthlessly exposed.

The second half was much better, as Cuthbert and Weir got on the ball more often and Scotland committed numbers forward to pin Ukraine back. But ultimately they lacked precision in the final third, almost to their ultimate cost.

However, having scored a last-minute winner against Hungary, the spirit is clear to see and a big positive for the manager.

Scotland face the toughest test of the campaign on Tuesday when they face free-scoring group leaders Spain in Seville (20:00 GMT).

Chloe Arthur (Scotland) wins a free kick in the defensive half.

Daryna Bondarchuk (Ukraine Women) wins a free kick in the defensive half.

Attempt missed. Rachel Corsie (Scotland) header from the centre of the box misses to the right. Assisted by Caroline Weir with a cross.

Attempt missed. Erin Cuthbert (Scotland) left footed shot from outside the box misses to the right following a corner.