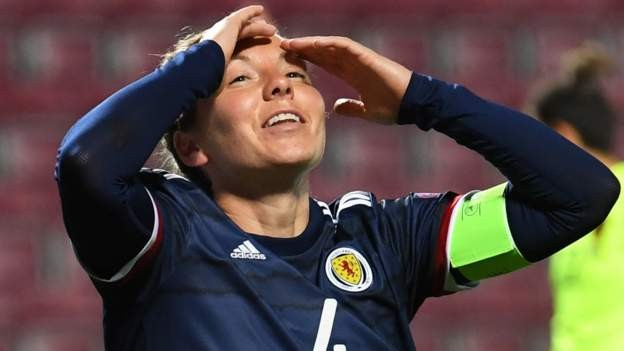 The defeat is the first of interim head coach Stuart McLaren's tenure, after securing a 10-0 win against Cyprus in his debut match on Friday

It was Scotland's fourth defeat in five games as they missed several chances.

Ana Capeta scored after a goalkeeper error from Jenna Fife, and Fatima Pinto doubled the advantage late on.

"They've played well without being effective in the most important part of game, scoring goals," said McLaren.

"The performance reflects what the team is capable of; they're a threat against anyone at this kind of level, but they have to have conviction to finish off that good play."

Scotland finish third in Group E, with Finland qualifying for the finals in England as group winners and Portugal reaching the play-offs.

The defeat in Cyprus, where the game was being played due to the current Covid-19 travel restrictions, rounds off a deflating group campaign for Scotland, who will not feature in the delayed finals next summer.

McLaren's side started with zip and energy that would have been fuelled by Friday's 10-0 win over Cyprus, as their eagerness to move the ball with pace and purpose resulted in Claire Emslie flashing in a low cross for Erin Cuthbert who skied over.

Chelsea midfielder Cuthbert again fashioned an opportunity for herself, this time receiving a pass from Caroline Weir before gaining a yard and lashing a shot wide.

The Scots continued to press, as yet another sweeping move ended again with a dangerous cross from Emslie who found Martha Thomas, but the West Ham forward's hooked attempt towards goal forced a smart save from Patricia Morais.

Portugal's keeper was called into action again just moments later to parry over Cuthbert's drilled effort, but McLaren's side would be made to pay for failing to take advantage of their dominance in calamitous fashion.

Fife took a heavy touch from a Rachel Corise pass back, allowing Capeta to slide in and block the Scotland keeper's attempted clearance into the net.

The Scots responded well, as Weir tried her luck from distance before Thomas failed to divert a near-post flick on target just before the break.

Scotland continued to dominate possession in the second period, but - unlike the first half - chances were few and far between as Portugal defended admirably before doubling their advantage as Fatima Pinto hammered home in injury time to consign interim boss McLaren to a first defeat.