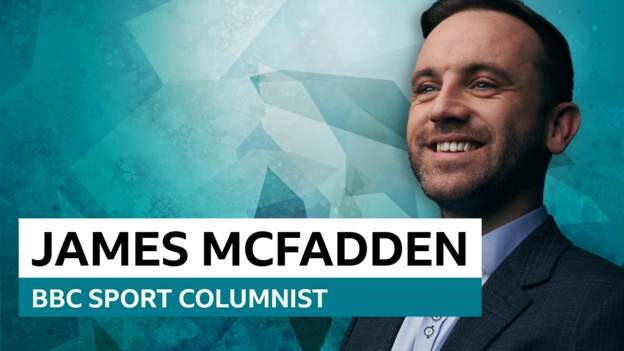 I've been saying it for months. I love Scotland, but it's not blind optimism. I know the players we have and what they are capable of.

And, after a heroic effort at Wembley, they now have the chance to break new ground for the national team and make history.

To go down and outperform England, just wow. I had faith in this team, but to a man Scotland were exceptional.

On another day, we could have earned a famous and deserved victory. No doubt about it, England would have come away glad they got out of it with a point.

Being honest, I was pretty nervous on the morning of the Czech game, which isn't normal. But, leading up to the England game, I was calm. I thought England beating Croatia would help us, because I knew the feeling would be they would turn up and smash Scotland.

The English perspective will all be about where it went wrong and what they needed to do better. It doesn't matter. They could have had anyone on, they wouldn't have had an impact given what Scotland put into that game.

Andy Robertson has grown into the role of being captain brilliantly. In Kieran Tierney, we saw what we were missing against the Czechs. Billy Gilmour was the star man, but Callum McGregor and John McGinn covered everywhere. It was phenomenal.

Grant Hanley didn't give Harry Kane a kick, to the point he was subbed off without really doing anything.

Stephen O'Donnell came in for a lot of stick after the Czech game, but he showed at Wembley why he should be in that team. He nearly scored with an unbelievable effort. At the other end, big David Marshall had one save to make and he made it.

Robertson was right to praise the players after the match, particularly O'Donnell. To cope with the stick he's had with the pressure coming against world-class players, he was incredible.

People from the outside can say "I wouldn't play him" or ask "why is he playing?". You see it in how the team plays why the person should be there.

'Croatia will struggle to find a weakness'

For all the plaudits and credit, it will mean little if the team come up short against Croatia on Tuesday night.

World Cup finalists or not, if we play to that level, nobody will want to play us. If we match that performance and effort on Tuesday night, we have a great chance of qualifying. Beyond that, who knows what could happen?

We have shown we are a unit that we can press, we can sit back and defend, we can pass and create. It's just that last bit and taking chances we are needing to work on.

Croatia will know they are in a fight. Both sides need to win and they have to match our effort.

They have been a solid unit over the years that are hard to beat. But I think, if we play our game, we should be fine. They'll be looking at our players trying to find a weakness. On the basis of the game at Wembley, they'll be struggling to uncover one.

We can't get carried away though. We have to approach it in the right manner and you can be sure Steve Clarke is hammering that home. The Croats have looked ordinary, but nothing but the best will do for Scotland on Tuesday.

What would progression mean? It would mean everything.

The expectation level and the support of the national team is on such a high. The players are carrying that weight.

There were question marks after Monday's defeat. But the manager has dealt with the pressure of getting us there in the first place and opening the tournament at Hampden. They are now trying to do what's never been done before and get out of a group at a major finals.

We've had some unbelievable teams with world-class players over the years who haven't managed it. This would be historic for Scotland.

As I left Wembley on Friday night, all that was there was pride from the Scotland supporters. Pride in the players and pride in the performance that they were better than England.

It's now time to show Europe they can be better than Croatia as well.