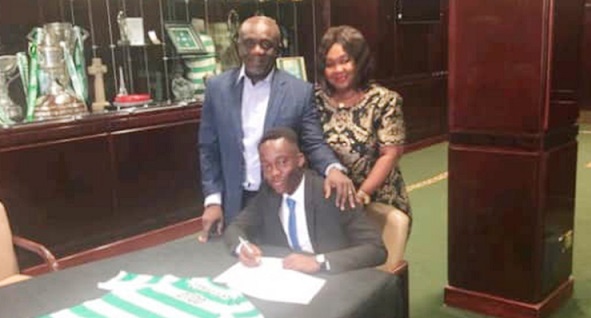 A 16-year old Scotland-based Ghanaian footballer, Ewan Otoo, has signed a two-year deal for Scottish giants, Celtic, with the aim of developing his potential so enable him to excel at club level and become very competitive.

Otoo, who started playing football at a tender age for Eastwood Boys Club and has already featured twice for the U-16 national team of Scotland, said in spite of the interest by the Scottish Football Authority, he was desirous to play for Ghana at the international level in future.

“I started playing for Easttwood Boys Club at a tender age before Celtic signed me to play at the U-16 level for a period of two years.

Before then, I was called to play at the youth level in Scotland where I have played a number of matches and scored a couple of goals.

But in future I want to play for the national team at the senior level because Ghana is my root and I need to help put our international football on a higher pedestal,” Otoo said when he visited Daily Graphic offices in Accra yesterday.

He said he had been following the Black Stars and had become so much enthused that given the opportunity, he could be one of the players to put Ghana on a higher pedestal at the world stage.

Asked how he got the nod to play at Celtic, Otoo said when he was playing at Eastwood Boys Club, some technical team members from Celtic came to watch some of their matches and realised that his style of play was magnificent and then contacted his parents who gave him the nod to sign for Celtic.

“I started playing for Celtic at the age of eight and have been featuring regularly in their youth team but only signed a two-year professional contract a couple of months ago to play at the youth level.

The professional contract is signed at this level and I hope to excel so I can feature prominently at the senior level.”