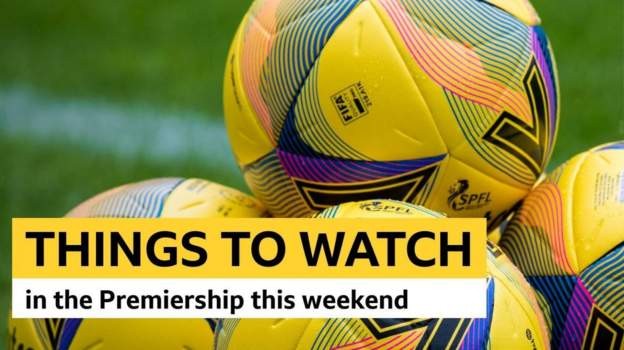 The Scottish Premiership is threatening to break into two leagues at the top and bottom as it heads into a busy period of fixtures.

Five points separate second-placed Celtic with Motherwell in fifth, but there's a further five before St Mirren in sixth and only seven between the Paisley side and Ross County at the bottom.

Hibs have the best opportunity to break out of the bottom seven into the battle for European qualification spots, but Jack Ross' side squandered one of their games in hand with a midweek defeat by County.

What should you be looking out for this weekend with four top-flight games on Saturday and two on Sunday involving Old Firm sides on the back of contrasting European fortunes?

In late August, Motherwell dug out a seventh successive league victory over Dundee in the middle of a three-game winning run. They can match that if the visitors follow up 2-0 wins over Aberdeen and Hearts at Dens Park.

Graham Alexander's side have been hard to predict, with October yielding just one point from a possible 15.

However, confidence should be high after sweeping Hearts aside as they registered no fewer than 20 shots last weekend - even without striker Kevin van Veen, who got both goals at Pittodrie.

James McPake's hosts have managed just one clean sheet at their own place in the Premiership and a wobbly defence is sure to be put to the test by the Steelmen's aggressive approach.

Hearts missed the chance to go second last weekend when they were turned over at Fir Park, so how will Robbie Neilson's side respond to just a second league defeat of the season?

A disappointed manager said Motherwell had "ratted us for fun", lamenting his side's inability to cope with the direct style of fired-up opponents.

St Mirren won't be as robust as Motherwell, but the Buddies have been impressive on the road, losing just once in seven away days, while only Rangers and Celtic have scored more on their travels.

The Paisley side are on a run of five games without a victory and Hearts have stumbled too, with just one win in their last six.

County not only secured their first home league win of the season on Wednesday by beating a Hibs side fresh from their League Cup semi-final defeat of Rangers, but ended Malky Mackay's run of 19 home league games without a victory as manager across spells with Cardiff City, Wigan Athletic and his current side.

More importantly perhaps, it lifted the Dingwall side to within a point of Dundee at the foot of the table and built on their 5-0 hammering of the Tayside club at Dens Park and a dogged display despite losing away to Rangers.

Having halted Hibs' Hampden heroes, can County build on that further against a Dundee United side who ended their own three-game run without a win by beating Aberdeen on Saturday?

United head north having won on three of their last four visits to Dingwall and drawing the other and, along with Hearts, have the chance to leapfrog Celtic into second with the Glasgow side not playing until Sunday.

Whose Hampden hangover is worse?Christian Doidge (left) is suspended for the game against St Johnstone

Having been on a high after Sunday's semi-final win over Rangers, Hibs came crashing down to earth by losing 1-0 - and their discipline - against County on Wednesday.

A fifth league defeat in a row is the worst run the Edinburgh side have experienced since Terry Butcher's relegation-bound side suffered six in 2014.

Now they have to travel to Perth without Hampden hat-trick hero Martin Boyle and Christian Doidge after the two forwards were shown red cards in Dingwall - and now nine points behind United in the race for European places and only one ahead of Saturday's hosts.

St Johnstone are looking to recover from their League Cup exit as the holders were beaten 1-0 by Celtic on Saturday to leave them with only one win in six.

With their bid for a third consecutive national cup victory over and only five points ahead of bottom side County, Saints can now concentrate on avoiding being dragged into a relegation fight.

Giovanni van Bronckhorst heads for West Lothian for his first Premiership game as Rangers manager having got his tenure off to a flying start with a 2-0 win over Sparta Prague.

However, despite a four-point lead at the top, last Sunday's League Cup semi-final defeat by Hibs - and a record of three wins in their latest six outings - means question marks remain about their domestic performances. It also led to centre-half Connor Goldson's suggestion that some of his team-mates lack the "hunger" they had last season.

Despite Livingston earning a reputation of making it tough for the Old Firm, especially on their own artificial surface, they have failed to score against Rangers in their latest nine meetings - losing 11 of their last 12 and drawing the other since a 1-0 win at home in September 2018.

However, David Martindale's mid-table side go into this one unbeaten in five and drawing three in a row.

Celtic and Aberdeen are used to meeting when both are on a high, but this time they are looking to recover from a disappointing few days that will overshadow former Scott Brown's return to the stadium where he captained his side to much silverware.

The Dons arrive not only smarting from their 1-0 Tannadice defeat by Dundee United but by Funso Ojo's red card following an altercation with a home fan.

Aberdeen are unhappy they were unable to appeal against the second yellow card that leaves the midfielder suspended - despite the fan being charged with assault and banned by his own club.

Manager Stephen Glass' side, with two wins in 15 outings, will look to end a run of 15 without victory over Saturday's hosts since a 1-0 win at Celtic Park in May 2018.

Despite a 3-2 defeat that left manager Ange Postecoglou acknowledging there is a gap in quality between his side and Bayer Leverkusen as his side exited the Europa League, domestically, Celtic remain unbeaten at home this season. They had won eight and drawn once in nine unbeaten games before Thursday.

Their shaky defence should be less troubled at home to a side who have not scored in their latest two outings and who have lost 29 of their last 31 visits to Celtic Park.