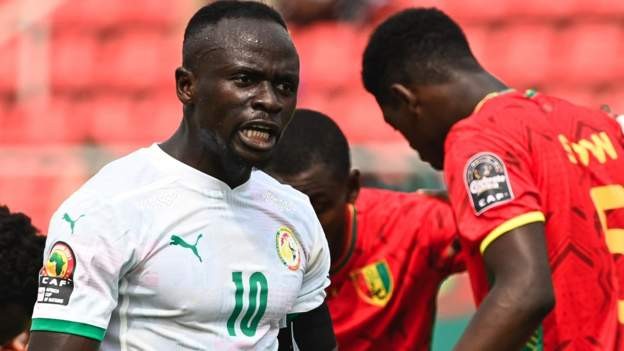 Senegal finished as runners-up at the Nations Cup in 2019, while Guinea were beaten in the last 16

Senegal and Guinea moved closer to reaching the last 16 at the Africa Cup of Nations following a 0-0 draw.

The Guineans had the only real chance of the first half when Seny Dieng saved a low effort from Morgan Guilavogui.

Senegal grew into the Group B clash after the break as Abdou Diallo had a header tipped over and Bouna Sarr dragged a shot across goal and wide.

Both sides have four points after two games, which could see them progress as one of four best third-placed teams.

Senegal had needed a 97th-minute penalty to beat Zimbabwe in their opening game and Aliou Cisse's side, who are among the favourites for the title, put in another disjointed display in Bafoussam.

Cisse was without four first-choice players because of coronavirus, with goalkeeper Edouard Mendy and captain Kalidou Koilibaly yet to feature in Cameroon and defender Fode Ballo-Toure and midfielder Idrissa Gana Gueye testing positive after Monday's win over Zimbabwe.

The Teranga Lions lacked cohesion in attack and were careless in possession in the opening 45 minutes and Guinea should have broken the deadlock with a counter-attack on the half-hour mark when captain Naby Keita found space on the right and centred for Ilaix Moriba.

The teenager took a touch before teeing up Guilavogui, who saw his low shot clawed away by Dieng before alert defending from Saliou Ciss scrambled the rebound behind.

Senegal, Nations Cup runners-up in Egypt in 2019, were brighter and more purposeful in the second half but influential Liverpool forward Sadio Mane struggled to make an impact and Sarr's set-piece delivery was inconsistent.

Yet the 24-team format means both Senegal and Guinea should reach the knockout stages, barring upsets against Malawi and Zimbabwe respectively in their final group matches on Tuesday (both 16:00 GMT).

Ibrahima Sory Conté II (Guinea) wins a free kick in the defensive half.

Mamadou Loum (Senegal) wins a free kick in the defensive half.

Saïdou Sow (Guinea) wins a free kick in the defensive half.

Attempt missed. Habib Diallo (Senegal) right footed shot from the right side of the box is too high following a set piece situation.

Attempt missed. Ibrahima Sory Conté I (Guinea) right footed shot from outside the box is high and wide to the right from a direct free kick.

Mohamed Bayo (Guinea) wins a free kick in the attacking half.

Joseph Lopy (Senegal) wins a free kick in the defensive half.

Attempt missed. Bouna Sarr (Senegal) right footed shot from outside the box is too high from a direct free kick.