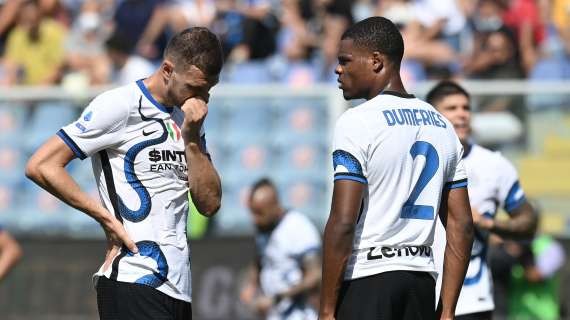 After a start-up period in which Denzel Dumfries had to be patient on the Inter Milan bench, he is convincing more and more Italians of his qualities. On Saturday he was allowed to start in the starting line-up against Bologna for the first time and he listened to that with an assist. In the 6-1 win, he thundered down the right wing as usual and that came to him with a lot of praise.

The Italian newspaper La Repubblica was particularly pleased with his performance, which is 'approaching perfection', while he has already been given a new nickname: 'the flying Dutchman'. The medium rewarded his excellent performance with a score of 7.5. His trainer Simone Inzaghi was also more than satisfied with Dumfries' performance.

After the game, he said in the press conference that he was happy with his progress. "Dumfries has played a really great game. He is training well and knocking on the door faster than expected. In addition, he is fully engaged in learning the Italian language. It is a big victory for the fans. There is no better feeling."

The newspaper La Gazzetta dello Sport was also impressed by his match. 'Dumfries made his debut in the starting line-up without scoring, but the right wing was paved in a great way. He played well and made Achraf Hakimi forget a bit.' Dumfries himself is not involved in this at all. "Will I forget Hakimi? I'm not thinking about that. I'm very proud to be here at all."