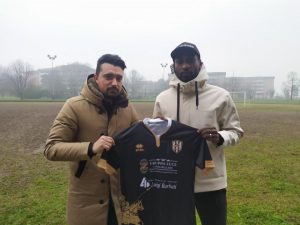 Asd Fanfulla announces that as of today Emmanuel Akwa Dei Agyemang is a Warrior player.

A striker born in 1998, he returns to Italy after last season's stinct with the Bangor City, three national titles in the Welsh Premier League, "the oasis of tricolor football in Wales" La Gazzetta dello Sport defined him at the end 2019 given the presence of 16 Italian players in the squad and the bench entrusted to Pasculli.

The 22-year-old scored 9 goals in 16 appearances then the outbreak of the pandemic blocked official competitions in Wales as well. Hence the return to Italy.

In between, however, two other experiences, in 2018 in Monopoli and then at Mosta, in the Premier League of Malta.

Then at Bangor, a club based in the oldest city in Wales, and now the Fanfulla with which he has already been training for a few days.

External, second or first striker. For the new player, 190 centimeters in height, there is not much difference on the role to play on the offensive front.

On Sunday he saw the new teammates closely in Oggiono, already discovering the most positive aspects of the group

“I saw a really united group, something they always told me and I immediately noticed. On Sunday's match, surely we could have won, the team has a lot of quality. I hope that the good recovery, however, can be a starting point to continue our run-up. On my position on the pitch, I am ready to take the field where the coach will employ me. There is no difference, I am ready to give 200% in any position. Also on Sunday, if the coach wants, I'm ready to go down the pitch and give my contribution ,”

For the general manager Andrea Luce, a new level purchase.

“An important entry, we are talking about a player with qualities that we lacked. We bet a lot on him. He has an impressive physical structure, as well as a remarkable speed. He grew up in some of the most prominent youth sectors and his experience in Wales certainly helped him in his training. He will certainly be useful for the coach's attacking phase,”