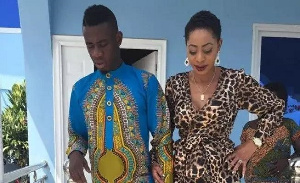 Afriyie Acquah’s fleeting but drama-filled marriage to ‘slay queen’ Amanda is a classic example of the fast and scandalous life of the modern-day footballer or athlete.

It is also but just two of several scandals involving the Black Stars midfielder and many Black Stars players.

An appreciable level of talent and commitment has seen the midfielder play for some mid-table teams in Italy and also capped 36 times by Ghana’ senior men’s national football team, the Black Stars.

However, it is his off-field activities that usually dominate the media space, overshadowing his rather impressive performances for club and country.

Acquah’s marriage to Amanda in 2014 raised eyebrows, with observers suggesting that the latter’s decision to ditch business mogul Kennedy Agyapong for Acquah was not influenced by love but a quest to enjoy the player’s wealth.

Less than 12 months into their union, a leaked audio of Amanda confessing to having an affair with Black Stars player Jordan Ayew and describing her husband as a ‘monkey’ emerged, causing irreparable damage to their marriage.

It’s 2019 and Acquah is in news again for another sex-related activity. Sex tapes are usually leaked by people other than the main actors but in the case of Acquah the feeling of having a woman ‘choke’ her throat with his ‘cock’ was too great to be experienced alone so he shared it on his Snapchat handle for his followers to share in the moment.

Afriyie Acquah is not the only Ghanaian football star whose name has been embroiled in scandals, his former captain and national teammate Asamoah Gyan has had his share too.

In June 2016, an alleged sodomy story broke out in Ghana’s electronic and print media with Asamoah Gyan identified as a person of interest in the matter which later became a police case.

Gyan consequently sued Sara Kwabla and four others for defamation and blackmail. This led to a protracted legal battle that was settled in March 2019 with Gyan at the losing end.

The latest Gyan scandal was his request for DNA tests for his three children with Gifty Gyan and annulment of his marriage with the lady.

Unfortunately for Gyan, the results of the DNA tests allegedly proved that he is the true father of Frederick Gyan, Raphael Gyan and Ohemaa Gyan.

Following rumours of his kids having different fathers, ex-Ghana star Odartey Lamptey sacrificed GHS 4,000 to prove the paternity of his three children and his biggest fears were confirmed when results proved that all three children were not his.

Speaking on the issue in a recent interview with TV3, Odartey said he felt ‘unbearable pain’ "I thought I was the father but upon rumours that they are not my kids, they said I have to do DNA," he said in an interview with TV3. He added, "My lawyer showed me where they do the DNA, I got to know that yes, the kids are not mine".

"I know, It was a difficult situation, I was very close with the children and for me to be able to do this, I told them I have an infection in my throat and upon doctors advise, I should be able to cure theirs now otherwise when they grow, they will have problems. At that short period, you find out that, they are not yours anymore... I don't know the kind of pain any human being can go through more than that”.

Mubarak Wakaso and the Parsi model

Another Black Stars player who has been in the news for sex or relationship related issues is midfielder Mubarak Wakaso.

Wakaso was reported to have impregnated a Paris-based model by name Marina Mason.

The lady who is originally from the Central Africa Republic claimed that the Deportivo Alaves midfielder impregnated her, forced her to abort the baby and jilted her after aborting the pregnancy.

Wakaso who has four kids with his wife, Nabuza failed to comment on the issue.

Appiah and Essien are two of the best footballers in the history of Ghana football and at their peak the duo gave Ghanaians a lot to cheer about.

However, it has been rumoured that the two legends do not have the best of relationships due to reports that Akosua Puni who is the wife and manager of Micheal Essien had an affair with the former Black Stars captain Stephen Appiah.

Though no evidence has been given to validate the claims, it is believed that Appiah and Essien are not on good terms because of the speculations.