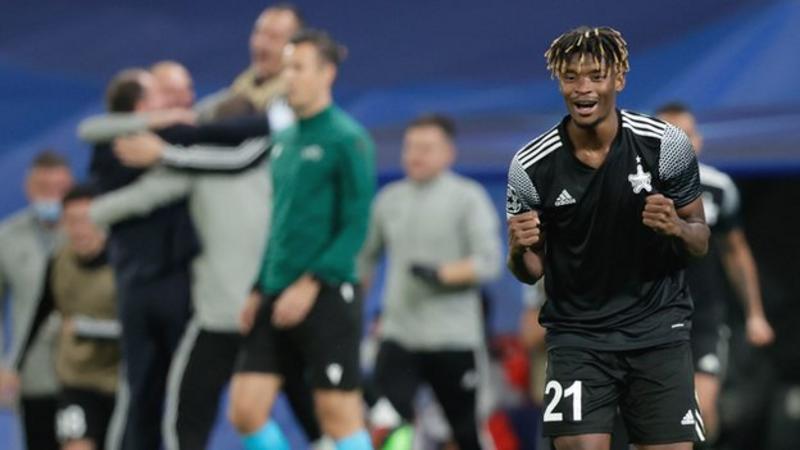 Halfway through the Champions League group phase, not many would have expected Moldova's Sheriff Tiraspol to be ahead of record 13-time champions Real Madrid or three-time winners Inter Milan.

The minnows may have come crashing back down to earth last time out with a 3-1 defeat at Inter, but they are well aware that they stand at a crossroads as they host the Italians on Wednesday.

The opening day home win over Shakhtar Donetsk and following seismic victory at Real Madrid have left the Moldovan debutants top of Group D, albeit on head-to-head record.

This month, home ties against Milan and Madrid will prove vital to Sheriff's hopes of a surprise place in the knock-out stages, with the club wrapping up their campaign away to Shakhtar next month.

"We are realistic - we know the job is not finished," Malawi international Charles Petro told BBC Sport Africa.

Even though he was omitted from the Champions League group stage squad despite playing in both legs of the triumphant play-off win over Serbia's Red Star Belgrade, Petro is among those revelling in Sheriff's success.

"It really has been like a fairytale," explained the 20-year-old, who joined Sheriff last year.

Should the European run continue into next year, Sheriff will have done so in no small part thanks to a significant African presence at a club that has long looked to the continent for cost-effective and underappreciated talent.

"There is definitely an African flavour at the club," Ghanaian Edmund Addo, who has started every group game, told BBC Sport Africa.

The midfielder, who admits he had "never heard of Moldova" before signing for Sheriff, is one of four Africans in Sheriff's Champions League squad.

Along with Mali's Adama Traore, Addo is one of two Sheriff regulars while Guinea's Momo Yansane appeared against Shakhtar and another Malian, Moussa Kyabou, has yet to make it off the bench.

After netting a brace against Red Star, Traore then scored the club's first Champions League group stage goal in the 2-0 win over Ukrainians Shakhtar.

The night's other goal was scored by substitute Yansane in his sole group appearance so far.

Beyond the Champions League quartet are a host of Sheriff deputies in the squad for the domestic league; Ghanaian Basit Khalid, Niger teenager Abdoul Moumouni, Ivorian Nadrey Dago and the Malawian Petro.

Known as the 'Kings' of Moldovan football owing to their dominance and disproportionate spending power, Sheriff reign supreme at home - where they have won 20 of the last 22 league titles.

Boasting a specially-constructed $200m (£154m) arena, Sheriff's wealth comes from the Sheriff Company which, founded in 1993, dominates everything in the local region from food retail to banking, media to politics.

Despite such financial backing, the club has tried to generate its own income, meaning its relationship with Africa stretches back some two decades.

"It was the business model of the club to sign foreign players from South America and from Africa, add to their value and then sell them to Russian clubs," Petr Lulenov, a local football expert, told the BBC.

Agent Leonid Istrati is regarded as Moldova's early pioneer of scouting Africa for promising talent in the early 2000s.

"Leonid has a great record of discovering players in Africa and after helping many move, agents and players started to write to him," says Alex Tean, who works for Istrati's agency iFootball and helped bring Petro to Sheriff.

Nigeria international Chidi Odiah was one of his early success stories.

The right-back moved from Sheriff to CSKA Moscow, where he won two Russian Premier League titles and the 2005 UEFA Cup, as well as playing 28 times for the Super Eagles.

Then there is Wilfried Balima who arrived at Tiraspol from Burkina Faso in 2005 and duly became one of the most decorated players in Moldovan football history.

After 15 years and almost 400 games for Sheriff, the former international retired in 2020 as a local legend with 13 league and seven cup wins.

Today, the Burkinabe is an assistant coach at the club.

"Leonid is not a magician and can't accommodate everyone but he has always tried to give those who were good enough a chance," Tean told BBC Sport Africa. "We have a great scouting network around Africa."

"Sheriff will only bring players in with a very small transfer fee," added Tean.

"It's not about world-class players but medium-level ones. Players with the biggest potential will be on the radar of big clubs and agents; we find players who are underestimated."

The cost of Sheriff's squad may be dwarfed by Real Madrid's but as many know, the Moldovans came out on top at the Bernabeu in September.

The two Africans who started for Sheriff were Traore and Addo, whose combined transfer fees - not made public - are unlikely to have been in excess of $1m.

An ever-present in the group stage, Traore, who joined from Metz in February, laid on Sebastien Thill's gloriously-struck winner against Real.

Addo also played a prominent role in the Spanish capital with a swashbuckling showing in midfield, where he faced Casemiro, Luka Modric and Toni Kroos, that drew widespread praise.

"It was amazing," Addo tells BBC Sport Africa. "I'm happy I was there. It was very special for me; there was so much joy in this moment.

"When we went there, we went to win. Of course it was Real Madrid and we respect them [but] we played without fear. It was the biggest game of my career."

As he watches on from the sidelines, Addo's good friend Petro is hoping that Group D's unlikely table toppers can build on the win at Madrid, one of the Champions League's biggest ever upsets.

"It was something incredible and really special," he said. "People around here still don't believe it actually happened."

Unsurprisingly, it has given the squad belief that they have every chance of securing yet more famous victories and an unexpected place among the 16 best teams in Europe.

"There is a confidence now," added Petro.