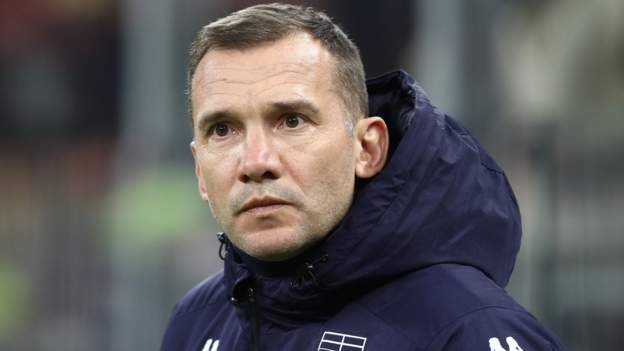 Shevchenko played for Dynamo Kyiv, AC Milan and Chelsea in his playing career and won the Ballon d'Or in 2004

Andriy Shevchenko has been sacked by Genoa, a little more than two months after taking over as coach.

The former Ukraine boss signed a deal until 2024 when he was appointed in November, but failed to win any of his nine league games in charge.

His sacking comes after a 3-1 Coppa Italia loss at his former club AC Milan on Thursday.

"The club thanks the coach and his staff for their hard work in recent months," read a club statement.

Former Genoa defender Abdoulay Konko has been promoted from the youth set-up to take charge of the first team on a temporary basis, with the assistance of Roberto Murgita.

Their three draws and six losses in Serie A under Shevchenko has left them 19th in the table, five points from safety.

Their next game is away to Fiorentina in Serie A on Monday.

The Apprentice is back: Find out who is in the firing line this weekFamily. Loyalty. Honour: The Peaky Blinders series 6 trailer is here