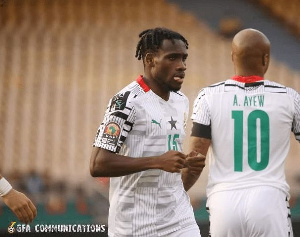 In-form Ghana winger Joseph Paintsil has sent well wishes to the Black Stars team ahead of their game against Brazil on Friday, September 23.

The Black Stars will take on Brazil in their first international friendly on Friday, September 23rd in France before travelling to Spain to play Nicaragua on September 27th.

Despite missing out in Otto Addo’s 29-man squad, the enterprising Genk winger has wished the team well ahead of the Brazil encounter.

“All the best guys” he tweeted while replying to a tweet from the Black Stars official page.

Ghana will take on Nicaragua three days later in Spain as part of preparations for the World Cup.