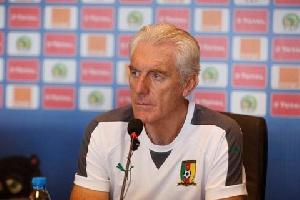 South Africa trainer Hugo Broos has earned plaudit from defender Rushine de Reuck for his immense contributions to the team.

Both South Africa and Ghana recorded double victory in the qualifiers to keep qualification hopes alive.

The Bafana Bafana sit top of Group G with 10 points with the Black Stars accumulating 9 points after 4 matches.

A victory for Bafana at home to Zimbabwe, who have had a disappointing campaign, and a win for Ghana in Ethiopia will keep the status quo heading into the final group match in the West African country next month.

According to De Reuck who dreams of playing at the World Cup, Hugo Broos gives the team the freedom to play and said it is as a result the team is willing to fight.

"He gives us the freedom to play and everybody is happy with him. The way he puts out the team, everybody understands what they need to do," De Reuck said.

"When you have that, along with a coach that believes in you, you'll fight on the field for him because you want him to succeed."