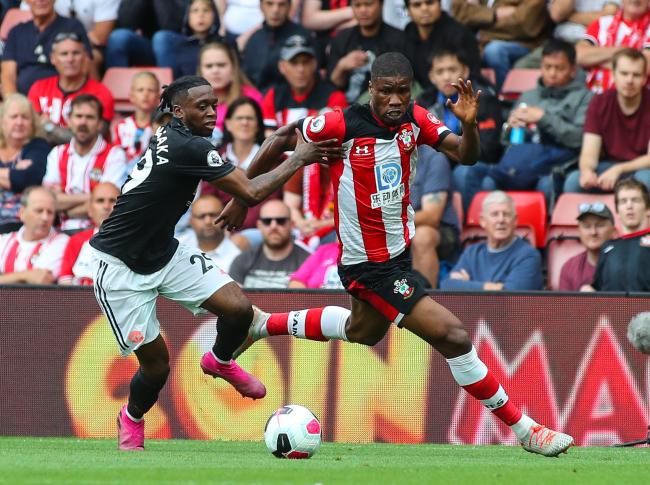 The Ghanaian was sent off during the 1-1 draw after picking up two yellow cards, with the second leaving the referee no choice but to give him his marching orders.

But his defensive teammate, Vestergaard, believes it was just a result of playing the way manager Ralph Hasenhuttl wants them to.

He explained: “We like to be very aggressive, get forward and not wait for the opponent to come to us.

“Obviously it could have been done differently but sometimes that’s the risk we take trying to win the ball instead of waiting for the opponent to make a mistake.

“It’s unfortunate and we had to dig in deep afterwards, but he had played well until then.”

Yan Valery was also sent off early on during his Saints career which proved to be a turning point for the right-back.

Since the red card, he has matured and developed into a regular starter for Hasenhuttl, although he lost his spot in the team for United’s visit last Saturday.

And after training with Danso every day, Vestergaard is confident the sending off won’t affect him upon his return.

“I’m not worried about that”, added the Danish international.

“He knows what he can do. It was an unfortunate red card and it made it difficult for the team to fight for three points and even for holding onto the draw.

“He played well until then and he is an aggressive player who doesn’t wait for anyone to come to him.

“Many times it works well, and we win the ball up high which gives us chances.

“On this occasion, he was late and got a second yellow card. It is what it is”

With the international break bringing a temporary halt to Saints’ season, Vestergaard believes, on the whole, that Hasenhuttl’s side have done well.

In their opening four Premier League matches they been beaten by Burnley and Liverpool, beaten Brighton and then drawn with Manchester United.

“Given the teams we’ve played, Liverpool and Manchester United are not games we’d expect to get a lot from.

“I think we could’ve gotten more from the Liverpool game but maybe that’s just my wishful thinking.

“We weren’t happy with Burnley at all. We went to Brighton and got the win and then got a good point against a top team at home.

“You’d always like more [points] but given how we started the season, this is definitely acceptable.”