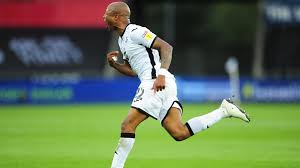 Swansea City coach Steve Cooper has stated that Ayew has a strong mentality after finding the net against Brentford in the Championship playoff round.

Ayew missed a penalty against his opponents but found the net late on in the game to secure a 1-0 victory for the Swans.

Cooper was pleased with the Ghanaian's reaction after the setback.

“Andre has missed a penalty, but brushed it off and raised his game even more, and it came off with the goal,” he told the media after the game.

“His mentality is of the highest order, to brush off the disappointing return from a penalty where you fancied him. To have such an impact and score the goal tells you everything about the mentality he has,” he added.

Andre has scored 15 goals and recorded seven assists in 44 league games this season.