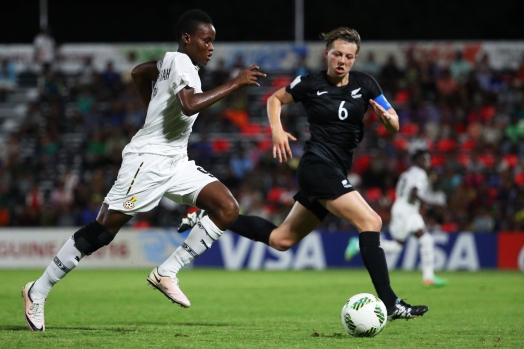 The female Under-20 team of Ghana has been boosted by the arrival of striker Sandra Owusu Ansah ahead of the crucial game against Cameroon on Sunday in the World Cup qualifier.

The striker, who plies her trade in Lebanon joined the squad for the game on Saturday in Cape Coast. Ghana have a slim advantage after picking up a 1-1 draw in Younde a fortnight ago.

A win or or a goalless draw game will see the Princess make another appearance at the mundial. Head Coach of the squad, Yussif Basigi confirmed the arrival of the prolific striker on Happy FM.

"The other good news is that Sandra Owusu Ansah has joined the camp from her Lebanon-based club, so I will say everything is going according to plan."

The youngster has been on top form, winning the treble in Lebanon with Club side Mosbeh.

Her arrival will see her partner leading scorer Priscilla Adubea upfront as the Black Princesses are determined for the ticket to France later this year.

Sandra Owusu Ansah was part of the squad that were eliminated from the group stages in Papua New Guinea, two years ago.

Meanwile, Coach Yussif Basigi is confident about the chances of his team on Sunday, stating the condition in camp is good.

"I think I'm okay with how camp situation has panned out so far. As for knocks it's part of football so I will say we have some players with that [knocks] but that doesn't prevent them from playing in the match. Knock is different from injury so we're not alarmed by it, but apart from that everything is fine in camp," Basigi stated.