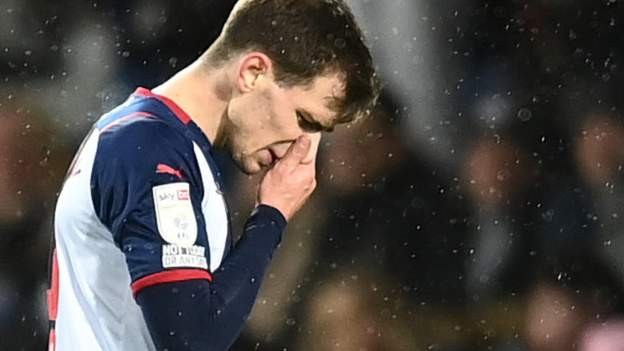 Championship promotion hopefuls West Bromwich Albion had to settle for a point as they were held to a goalless draw by Steve Cooper's improving Nottingham Forest.

After having Republic of Ireland midfielder Jayson Molumby sent off for two bookable offences in the 70th minute, Albion did well to see out the game as Forest chased a winner against 10 men.

Forest, who have now lost just once in 13 games, had to be the more content of the two teams after a fifth draw in six.

But third-placed Albion, who had a chance to win it in stoppage time when substitute Jordan Hugill blazed over, were booed off by some fans after a second successive goalless draw.

The Baggies have also only picked up three points from their past four matches and are seven points behind second-placed Bournemouth having played a game more.

On a horribly cold, wet night in the Black Country with Storm Arwen making its presence felt, Albion were the greater threat before the break but wasted their best chances.

Alex Mowatt curled an early effort wide, before Grady Diangana cut in and fired a low left-foot shot, which was parried by Forest keeper Brice Samba and cleared. And Darnell Furlong should have done better when he ballooned a left-foot shot over.

Mowatt looked to have threaded in Callum Robinson after the break only for the Republic of Ireland international to see his effort blocked.

But Forest were always looking as if they had the chance to menace the hosts on the counter attack - especially once Joe Lolley came off the bench.

It was his through ball that saw home keeper Sam Johnstone truly tested for the first time as he made a superb finger-tip save from Brennan Johnson's strike which deflected off Matt Clarke's outstretched leg.

And it was Lolley who was brought down by Molumby, whose second yellow card in nine minutes earned the Albion midfielder his marching orders.

It then seemed Forest could go on and win the game as they began to push further forward yet it was Albion who went closest to snatching it with that final chance at the end for Hugill.

Albion, who remain third, could now be overtaken by both QPR and Coventry City, who the Baggies are due to meet at the CBS Arena in next Saturday's lunchtime kick-off.

Forest, in 13th, are at home next Saturday to struggling Peterborough United.

"Until the red card we were more on the front foot. But that was a game changer.

"Then it was about staying in the game and we did that. We are very strong defensively.

"But we had four big chances to score. We are struggling for goals and we need to work on it."

"We were average for large parts of the game, particularly in the first half. We are a better team than that. We can be a better version than that.

"I didn't really like our performance. We didn't play with enough intensity or make enough passes. We maybe slightly lacked a bit of belief.

"It's been three games in a week and that can be tough physically, but I just felt the game was there to play a bit better than what we did. I'm slightly annoyed really."

Alex Mowatt (West Bromwich Albion) wins a free kick in the defensive half.

Ryan Yates (Nottingham Forest) wins a free kick in the defensive half.

Attempt missed. Ryan Yates (Nottingham Forest) header from the centre of the box is high and wide to the right. Assisted by Joe Lolley with a cross following a corner.

Attempt blocked. Matt Phillips (West Bromwich Albion) right footed shot from the right side of the box is blocked.

Attempt missed. Ryan Yates (Nottingham Forest) header from the centre of the box misses to the right. Assisted by James Garner with a cross following a corner.