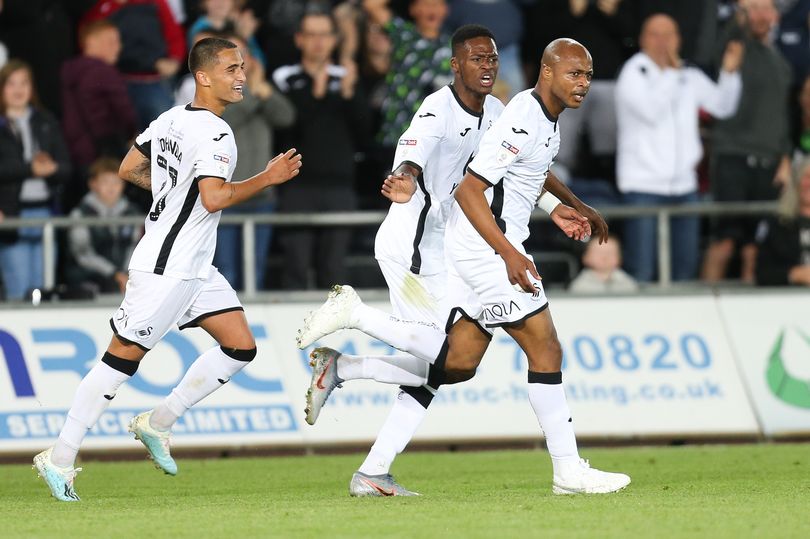 The Ghana skipper came off the bench to change Swansea’s fortunes and help send them through to the second round of the Carabao Cup, as they came from behind to defeat Northampton at the Liberty Stadium on Tuesday night.

The 29-year-old was subbed on with half an hour left to play, in what was a pivotal decision by Swans boss Steve Cooper.

At the time when the 29-year-old was brought into action, the Welsh side were trailing by the odd goal.

Ayew then scored twice, either side of a George Byers strike, setting up a 2nd round home tie with League Two side Cambridge.

These were his first goals for the club since May 2016, over three years ago.

The former West Ham man had not featured for the Swans since their final Premier League game back in May 2018 against Stoke City.

Ayew spent last season out on loan at Turkish side Fenerbahce where he scored five goals.

What a night for Andre Ayew who scored his first goals for Swansea in 1,185 days. Swans unbeaten after three games under Steve Cooper, and plenty of youngsters impressed tonight which bodes well. Over and out. #Swans pic.twitter.com/eFAnWtdg94

Andre Ayew’s return the story of the night for #Swans. He looked sharp and hungry and scored twice. What an asset he might be if he stays

Ayew tonight may have done everyone a favour. Wins us the game, puts himself in the shop window and improves our chances of reducing the wage bill - which still has to be the priority. A Professional performance in every sense. #swans

Andre Ayew has springs in his knees, pass it on. #scfc #Swans