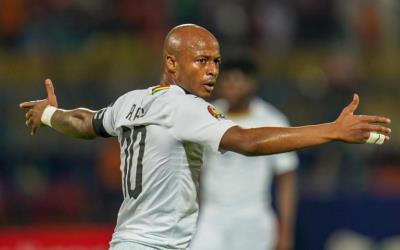 Swansea City vice-captain Andre Ayew made his 85th appearance for the Black Stars of Ghana against South Africa in the 2021 Africa Cup of Nations qualifier on Thursday evening.

Ghana got their Afcon qualifying campaign to a flying start following a 2-0 win over the Bafana Bafana at the Cape Coast Stadium in their Group C opener.

Goals from Thomas Partey and Kudus Mohammed ensured coach Kwesi Appiah's side picked up all three points to second on the table after Sudan thrashed São Tomé and Príncipe 4-0 in other corresponding fixture.

Andre made his debut for the Black Stars against Senegal on August 21, 2007 having been called up to the squad by Ghana’s coach at the time, Claude Le Roy.

The 29-year-old has represented Ghana at six AFCON tournaments and two World Cups and scored 15 goals.

He quit the national team in 2013 temporarily having been dropped for that year’s Afcon tournament, however, he returned to the squad later that same year.

The former West Ham forward was named Black Stars captain ahead of the 2019 Afcon and led the side to the Round of 16 stage before they were eliminated by Tunisia on penalties.