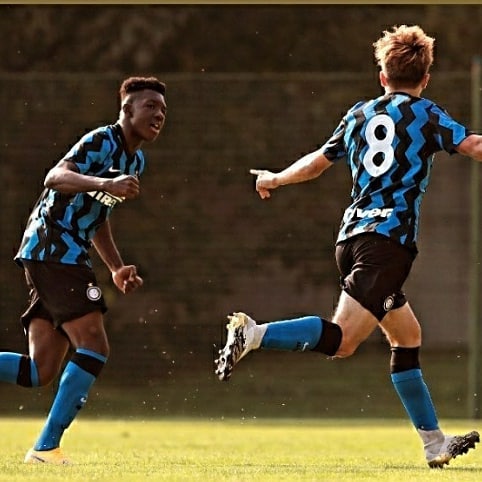 Ghanaian teenage sensation, Enoch Owusu, bagged a brace for Inter Milan in 4-2 victory away to Udinese last Saturday in Italy's U16 youth division.

Enoch gave Inter the breakthrough in the 20 minute with a powerful shot into the bottom left corner from the edge of the 18 yard box. This was after the Nerazzurries intercepted a pass from their opponents who struggled to play out from the back.

Upon receiving the ball at his feet, Enoch had two defenders and a midfielder converged on him to block his path. But the creative left forward dribbled past the opposition to create enough space to drive home his second goal of the season.

Inter doubled their lead in the 35 minute from a spot kick after Udinese committed on in their 18 yard box. Enoch Owusu, stepped up to the plate to convert the penalty kick by sending the goalkeeper the wrong way. Increasing his goal tally to three in two games.

The little genius however, could not continue the action, and had to be substituted in the 43 minute because of a minor bruise he suffered during his period on the pitch.