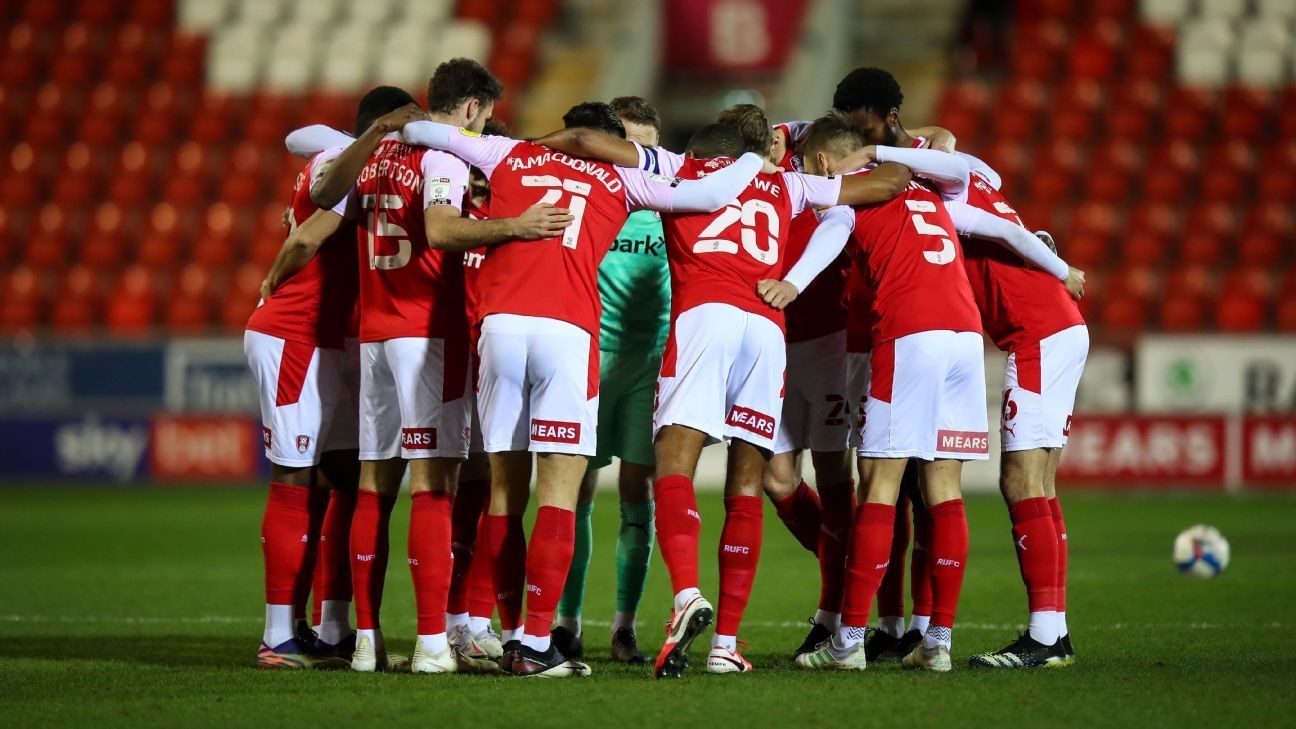 The 2020-21 season's pandemic-enforced late start and hard deadline for completion due to this summer's European Championship has caused a congested schedule that is a tiring enough experience for fans watching from home, never mind the players, as elite-level matches are being played almost every single day.

But spare a thought for Rotherham United, who are about to embark on a truly punishing climax to the 2020-21 season as they bid to avoid relegation from the Championship. Having won two of their last 10 games, the Millers sit 22nd in the table, two points off the bottom and seven points adrift of safety.

The good news is that Paul Warne's side now have several games in hand over every other team in the Championship, having only played 36 matches at this point, compared to the league average of 40. This leaves the Millers with 10 league fixtures left to drag themselves out of the mire.

Lingard loan has made him Premier League's most instrumental player. No, really

Mourinho's greatest takedowns: From Ndombele to Shaw and Ramos

The bad news? They will be forced to play all 10 of their remaining games within the space of 28 days:

The issues began to mount around Christmas time, when an outbreak of COVID-19 among the Rotherham squad saw matches against Derby County and Middlesbrough called off. Then last month a second, even larger outbreak of positive tests within the Millers' camp saw games against Luton, Brentford, and Coventry fall by the wayside. At one point, both manager Warne and his assistant Richie Barker were being forced to isolate at home simultaneously, meaning several senior members of the first team were left to take training. And, on top of all that, the Yorkshire club also had three games postponed due to bad weather over the winter.

"Naively, back in December, I thought if there was a real problem the season might be extended," Warne told The Times. "Looking back now, with the play-off dates written in blood and the Euros, that was naive.

"I did think that if three or four clubs were in the same position as us then something would have to be done. But it's only us. I don't think we've been treated harshly, we've just been unlucky. We've just been unfortunate and it's built up to this crescendo. It could be the most exciting end to a season or it could be the biggest anti-climax, we'll have to wait and see."

Rotherham's extreme misfortune has certainly got them up against it this season, but they are not the first club with a packed schedule.

Back in the winter of 2019, Liverpool were required to fulfil two competitive fixtures in the space of j24 hours, with the matches happening on different continents. The Reds had to face Aston Villa at Villa Park in the quarterfinals of the Carabao Cup on Dec. 17 (kick-off at 7:45 p.m. GMT) before also facing Mexican side Monterrey in the FIFA Club World Cup in Qatar the following day (kick-off at 5:30 p.m. GMT).

Much to manager Jurgen Klopp's chagrin, Liverpool solved the issue by dividing their ranks in two. An inexperienced group of youth and reserve players lost 5-0 against Villa, while their senior counterparts flew out to Doha, where they won their semifinal against Monterrey before beating Flamengo to lift the trophy.

Liverpool unveil the squad that will play in the Carabao Cup 24 hours before their Club World Cup semifinal 👀 pic.twitter.com/5HHiYxK9T0

Arsenal have also suffered the ignominy of having to play two games in one day, though the double-header in question came way, way back in the 1896-97 season. The situation meant that Arsenal's reserve team were deployed to comfortably beat Leyton 5-0 in the FA Cup while the supposedly superior first team slumped to an 8-0 trouncing against Loughborough in the old Second Division -- which is still the club's heaviest defeat on record.

Manchester United were not so successful when a concentrated run of games derailed their title chase in 1991-92, the final season of England's old First Division before it became the Premier League. Sir Alex Ferguson's team had to play four games in eight days to close out the campaign having topped the table for the majority of it.

However, United took just a single point from games against Nottingham Forest (April 20), West Ham (April 22), and Liverpool (April 26) -- the latter defeat handing the title to rivals Leeds United -- before United ended their season with a win over Tottenham Hotspur (May 2) on the final day.

Barcelona and Real Madrid are often considered inseparable when it comes to Spanish football's grandest occasions, but the rate at which they faced each other in 2011 was nigh on ludicrous. Indeed, due to the way the fixtures fell, we were treated to no less than four grandstand Clasicos in the space of j18 days.

The run began with Madrid hosting Barca in La Liga on April 16 (a game that ended 1-1), before beating their Catalan rivals 1-0 in the Copa del Rey final four days later. Then came two quick back-to-back games in the semifinals of the Champions League (April 27 and May 3) which Barca ultimately won 3-1 on aggregate on their way to winning the tournament for the second time in three years.

Perhaps the stakes weren't quite so high when non-league Canvey Island FC were forced to embark on an expedited finish to the 2000-01 Ryman League season, but the schedule was far more intense. Faced with a ridiculous pile-up that had already seen them play seven times in the 12 days prior, the Gulls finished the campaign by playing their final five games on five consecutive days.

The run featured games on a daily basis from May 1-5, all to finish second behind Farnborough Town and miss out on promotion to the Conference.