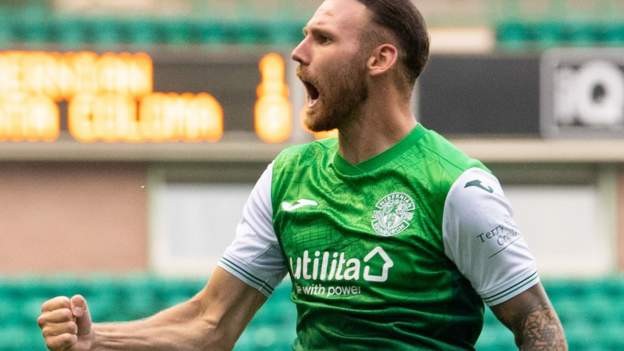 Martin Boyle tucked away an early penalty for Hibs

The hosts lost Joe Newell to a harsh first-half red card, while the team from Andorra finished with nine men.

Martin Boyle converted an early penalty, firing in a second with a deflected strike.

Croatians HNK Rijeka are the likely opponents awaiting in the third qualifying round after their 2-0 first-leg win away to Gzira United of Malta.

The 4,700 fans allowed inside Easter Road made plenty of noise, with Icelandic referee Vilhjalmur Thorarinsson coming in for some serious flak.

Newell's 29th-minute sending off came after a series of bad tackles from the visitors went unpunished and the Hibs midfielder made no contact at all as he slid in to shut down a clearance inside the Santa Coloma penalty box.

However, Santos collapsed holding his leg and the hapless referee deemed the sliding challenge worthy of a red card.

Ross later laughed off a "puzzling performance" from Thorarinsson, saying it was "difficult to comprehend".

"It went from going to plan and being relatively calm in the first 20 minutes to mayhem," he said.

"The officiating was questionable for both teams and we got spooked a bit by going down to 10 men and lost a bit of composure.

"But we changed shape and were a lot better in the second half, with a much greater intensity, and ultimately that's what causes them to lose players."

Hibs had benefitted from an early moment of madness, with Boyle converting a penalty after goalkeeper Ramos Prada had gone chasing after the ball at a corner and clattered into Nisbet.

With Ross' side rattled by the red card and the visitors' roughhouse tactics, Santa Coloma sent their only effort on goal inches wide before the break.

Boyle's second goal settled nerves, coming just two minutes after the restart, as he skipped away from a wild tackle and his shot from the edge of the penalty area took a deflection on its way into the bottom corner of the net.

Boyle was then looking for a hat-trick as he raced at an exposed defence, only to be hauled to the ground by Santos, the rugby tackle resulting in a straight red.

Soon after, the tiring semi-professionals had another player trudging down the tunnel as Ramos was booked for the second time following an ugly chop at Nisbet's ankles.

Hibs defender Ryan Porteous squandered two close-range headers before finding the net with a third that was disallowed.

A Nisbet follow-up from a Kyle Magennis rocket was then ruled out, with two team-mates offside, but the Scotland striker stroked in a lovely finish after a slick passing move.

There was almost a fourth goal when an Alex Gogic effort grazed the post, but Hibs have a comfortable lead to take to Andorra next week.

Man of the match - Martin Boyle Boyle was on the receiving end of several bad tackles but kept going, adding a vital second goal to his early spot-kickWhat did we learn?

Hibs looked a bit rusty in the first half, struggling to find openings against a packed defence, and once again it was Boyle to the rescue with his powerful running and direct approach.

The speedy forward has grown in influence over every season at Easter Road since his arrival as a raw recruit from Dundee in 2015.

Boyle scored 15 last term, while Nisbet managed three more. Hibs fans will be counting the days until the transfer window closes, hoping those two are still around.