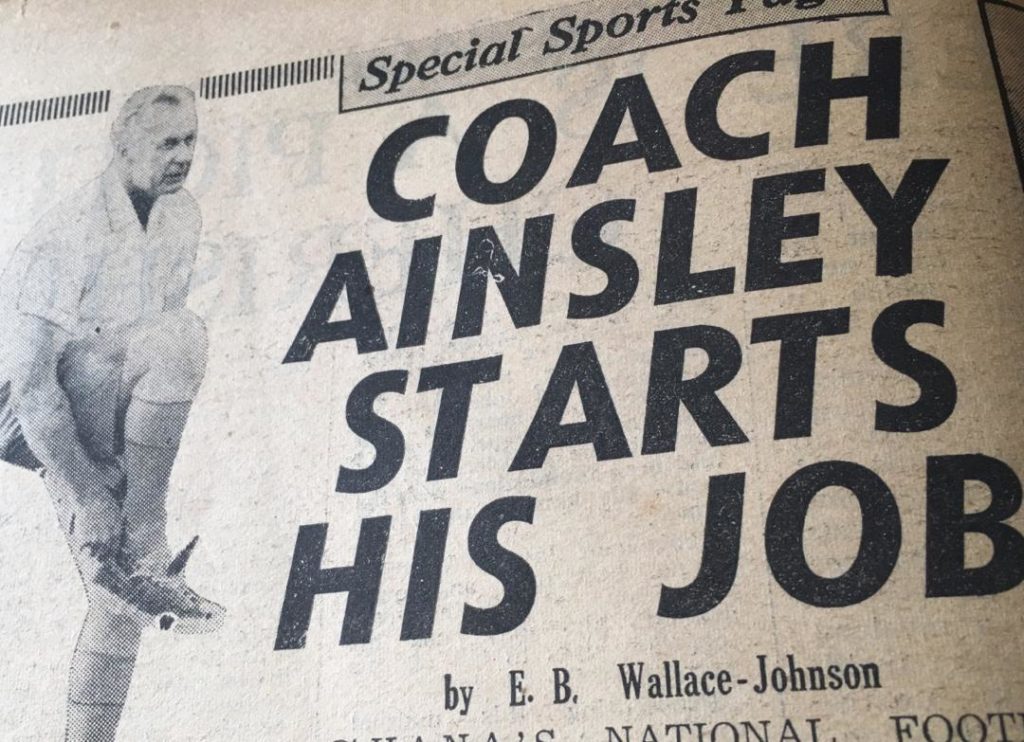 – I personally do not subscribe to the thought on the controversial issue of Ghana’s coach at any level being necessarily either an indigenous/local or a foreign/white coach just for the sake of it.

⁃ What we need is a coach who we can vouch for as having the pedigree to achieve great things with the team.

⁃ I have heard people often submit that foreign/white coaches should be engaged just because an indigenous/local coach had failed to make an impression in a tournament. As if to suggest that we haven’t gone on that road before. Often without buttressing their points with facts from any form of statistics.

⁃ The figures have it that, between 1958 to date, when Ghana started hiring coaches, we have had a total of about 40 coaches in all; both local and foreign.

⁃ Out of this number 25 have been foreign/white coaches, representing 60% of the whole number of coaches hired so far; whilst 15 have been indigenous or local coaches. Making it 40% of local coaches who have had the chance of coaching the Black Stars since 1958.

⁃ The argument then is, what has been the achievements of the total of 25 foreign/white coaches that we have had to hire; for which reason we are so quick to think they are the solution to our coaching challenges if indeed there are any.

⁃ The foreign/white coaches we have once hired thus far are:

⁃ Can anyone tell me with any conviction, what unique or significant achievements these fine foreign coaches chalked with the Black Stars during their individual tenure, that has not been matched or improved upon by an indigenous coach?

⁃ Carlos Alberto Parreira took the Black Stars to AFCON 1968 in Ethiopia and did he win the cup?

⁃ This was after C.K Gyamfi who had been hounded out of the job because his tactics was considered to be outmoded, had won the Cup twice on the bounce in 1963 and 1965 in Ghana and Tunisia respectively.

⁃ It was German coach Karl Heinz Marotzke who took us to the 1968 Mexico Olympics and is reputed to have earned the unenviable record of supervising Black Stars’ heaviest ever defeat in any match. Losing 10 nil to Bulgaria in a warm up match and ultimately did not progress beyond the group stage at the games.

⁃ It was Ted Dimitru from Romania who led the Black Stars to a 3-0 loss to Cote D’Ivoire in an AFCON qualifier at the Kumasi Sports Stadium in 1974, with the legendary Laurent Pokou registering a hat trick on the day.

⁃ Under him again Ghana also failed to qualify for the 1974 World Cup in Germany after losing 4-1 on aggregate to Zaire now DR Congo.

⁃ Malik Jabir was Captain then. He will corroborate this fact.

⁃ It was Karl Weigang from Germany who failed to qualify Ghana to the 1976 AFCON after we got beaten 3-0 by Mali in Bamako. And the return leg ending goalless.

⁃ So you see, Mali’s dominance over Ghana in recent times goes way back, even in the days when foreign/white coaches were handling the team, and thus not an emerging trend.

⁃ It was Yugoslav Milan Lukic who as coach of the Black Stars earning $1500 a month, who failed to qualify the team from the group stage at AFCON 1980 in Nigeria. A group that had Algeria, Guinea, and Morocco. We could only beat Guinea 1-0.

⁃ Willie Klutse got Ghana’s only goal in all the 3 matches we played.

⁃ That should be enough where National team engagement of foreign coaches are concerned.

⁃ The story at club level has been no different. Question is; what significant achievement have these foreign/white coaches chalked with the club they have had the opportunity of coaching?

⁃ All of Ghana’s successes at African club championship competitions were delivered by indigenous coaches in Ibrahim Sunday and Jones Attuquayefio. Ironically Jones Attuquayefio wrestled one of those trophies at the expense of his German counterpart in Hans Dieter Schmidt.

⁃ As we write, Ghana’s two representatives in Africa’s club football competition under the tutelage of foreign/white coaches have been bundled out of the competitions at the preliminary stage. If we attribute those failures in the past to the incompetence of the indigenous/local coaches in recent times; have we now found the antidote to the said coaching malaise under the foreign coaches who supervised the exit of the clubs from the competitions?

⁃ Sometimes there is also the argument that local coaches do not upgrade themselves.

⁃ I find that argument laughable.

⁃ Where do those individuals or group of individuals who we are being told to go and get that upgrade from, get their knowledge in the game?

⁃ Under whose tutelage or tutorial does Guardiola, Mourinho, Pochettino, and all the other top coaches we know across the world go to get their upgrade?

⁃ Coaching is largely by INTUITION.

⁃ You must have a certain sense of imagination of how you expect the game to be played, and then you set out to execute that thought or what you might have imagined with your choice of players who you think can execute what you have in your mind’s eye.

⁃ If what the so-called lecturers of the game teach their students in tactics and the like is what win games, then like the sciences, the coaches who deploy those tactics from those trained by these ‘Tactics Professors’ will be expected to win every game they go out there to play; based on the assumption that there are some ‘Football Tactics Professors’ somewhere out there whose tuition of the game are guaranteed victories automatically.

⁃ Ask anyone who has had the opportunity to attend top class coaching courses, and you would realize that most of the work are in the form of presentations in theory on some aspects of the game and demonstrations of sessions on the field by the participants or coaches themselves.

⁃ The supposed football expert(s) for all intent and purposes act as supervisors of some sort during those courses.

⁃ It’s more of your deep insight into the knowledge of the game personally, than what a supposed football technical instructor somewhere is expected to teach you.

⁃ So who are those ‘Professors’ in the game, after all, churning out the Guardiolas, Pochettinos, Klopps, Diego Simones, Allegris, Erik ten Hags, to mention just a few.

⁃ How did those ‘Football Lecturers’ come by that knowledge in teaching the game in the first place?

⁃ Why are their names not the ones being mentioned all over the place?

⁃ Let’s not be hoodwinked into thinking those coaches who have become household names are doing something out of this world that others elsewhere; particularly here in Ghana whether in the past or present couldn’t or cannot match or do better than.

⁃ It’s the environment in which they operate that seems to make them look superior to us.

⁃ Can you imagine if CK Gyamfi, Jones Attuquayefio and or Ibrahim Sunday operated in the European environment like their counterparts in Europe and elsewhere we consider to be tactical geniuses?

⁃ Again have you taken the trouble to analyze ‘The Factors that Affect Performance’ in any Endeavor? Football coaching in our environment cannot be an exception.

⁃ Others also put forward frivolous arguments that local coaches easily get influenced by player agents, and do not also have the charisma or if you like “balls” to handle egocentric and affluent players because the players play in a so-called sophisticated league abroad.

⁃ Contemptuous as this point might sound, my response to it is that; If those players can look their biological parents in the face and exhibit arrogance and disrespect towards them because they now command immense financial muscle more than those parents of theirs, then they would be justified to do same to some of the indigenous/local coaches who nurtured and helped them get to that level of their so-called lofty heights in their careers.

⁃ Should that happen however, blame it on the players’ bad attitude and mannerism, and not the coaches’ inability to handle supposed top players, because indisciplined players exist and abound in virtually every football jurisdiction in the world especially when they allow their acquired fame and fortune to get into their heads.

⁃ On the issue of local coaches eliciting handouts from player ‘agents’, and doing ‘business’ with and on the job et al. Let’s be honest in answering this question: Which group of coaches introduced the word “AGENCY” into our ‘football diction’. Indigenous/local or Foreign/white coach? I rest my case on this.

⁃ The other thing people are quick to point out to local coaches are a certain UEFA Licenses or Badges.

⁃ I can tell you on authority that in most Eastern European countries, UEFA licenses of any category go up for ‘sale’ without the ‘applicant’ putting even a dot on a piece of paper or seeing any football pitch, not to talk about setting foot on it.

⁃ It’s a thriving business in the Football Federations of a number of these Eastern European Countries.

⁃ Again I thought we had asserted ourselves from the days of colonialism, and thus do not need to be Europeanized before you get validated. Do Europeans require or insist on CAF coaching licenses to endorse the standard of coaches in their jurisdiction?

⁃ The choice of a foreign/white or indigenous/local for our national teams or any other team for that matter may be ‘yours’, but spare some of us the fixation on the thought that the former is better and thus preferred to the latter, because the facts and stats just doesn’t support that notion and thus flawed.