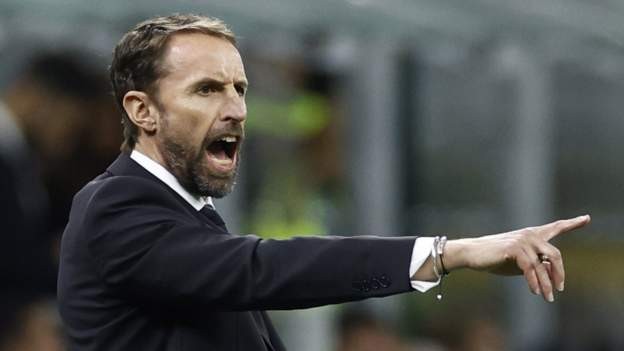 England's winless run continued as Gareth Southgate's side suffered a first relegation to the Nations League's second tier after defeat by Italy in Milan.

The Three Lions are in their worst form for eight years and have only their final match against Germany to come at Wembley on Monday before their World Cup opener against Iran on 21 November.

How much pressure is Southgate under?

In their two major tournaments since Southgate was appointment manager in November 2016, England reached a first World Cup semi-final in 28 years in 2018 and a first ever men's European Championship final last summer.

Undoubtedly the Three Lions have come a long way from their humiliating last-16 defeat by Iceland under Roy Hodgson at Euro 2016, and Sam Allardyce's subsequent 67-day and one-match reign.

But England's worst home defeat since 1928, in the form of a 4-0 loss to Hungary, was greeted with boos at Molineux in June on a dismal night which Southgate described as "chastening".

Four winless Nations League matches in the space of 11 days left Southgate with more questions than answers heading into this final international break before the World Cup.

Despite a strong line-up, and with limited opportunities for the players to impress for a place in the World Cup squad, England were unable to rediscover their spark as the threat of relegation loomed.

Once again the boos rang out from the England fans as Southgate applauded the travelling support after the full-time whistle - and the England manager will now be desperate for a response on home soil to end the camp on a positive note.

How concerning is England's form?England needed to avoid defeat in Italy to have hope of avoiding Nations League relegation

The upcoming meeting with Germany now represents Southgate's final chance to trial players and tactics before the World Cup, where they will bid to improve on their run to the semi-finals four years ago.

However, the numbers do not make encouraging reading for England with just one game to play until then.

In terms of competitive international matches, this is the Three Lions' longest winless run since October 1992.

Their uninspiring sequence of Nations League results and performances was preceded by a 22-match unbeaten run - excluding penalties, the means by which Italy ended England's bid for a first major trophy in 55 years last summer.

But this defeat - their third of this current five-game winless streak - saw England's winless run extend to five matches for the first time since June 2014, when they exited the World Cup at the group stage.

In all, England have won 64% of Southgate's 75 matches in charge and this form represents uncharted territory during the former under-21s manager's tenure.

What about the lack of goals?Harry Kane has made a fine start to the season at club level, scoring six Premier League goals in seven games

A concerning factor during England's winless run has been the lack of goals.

Southgate's side have now gone 495 minutes without scoring in open play, with Harry Kane's penalty against Germany in June their only Nations League goal.

Their last open play goal was scored by Raheem Sterling in a 3-0 win over the Ivory Coast in March, while they have not scored in a competitive match since beating San Marino 10-0 in November last year.

In fact, San Marino are the only other nation yet to score a non-penalty goal in the 2022-23 Nations League.

On Friday the visitors' first shot did not arrive until the 35th minute when Reece James' shot was deflected wide, as England went five consecutive matches without scoring in the first half for the first time since June 1985.

It also ensured the Three Lions will line up against Germany in their worst scoring form in competitive matches since November 2000 - when they last went three games without a goal.

Can Maguire shake off club troubles?Bar one error, Harry Maguire (right) replayed the faith shown in him by Gareth Southgate

The two fixtures against Italy and Germany presented Southgate with his final opportunity to trial players and tactics before his side's World Cup opener versus Iran on 21 November,

Despite not starting a game for his club in six weeks, the England boss selected Manchester United captain Harry Maguire in a back three, alongside Kyle Walker and Eric Dier.

Though Maguire's club form is a concern, Southgate has made clear his faith in those players who have been an integral part of England's runs at major tournament during his tenure.

Aside from losing Gianluca Scamacca before the striker headed onto the post in the early stages, Maguire repaid that loyalty, as both sides struggled to create clear-cut chances.

Elsewhere, Jude Bellingham furthered his case for inclusion in the starting XI as he partnered Declan Rice in protecting the defence, with BBC Sport readers rating him as England's best player on the night.

James and Bukayo Saka were the players tasked with providing width, with Arsenal forward Saka unable to have an impact in the unfamiliar role as players such as Luke Shaw and Ben Chilwell struggle for minutes and form at club level.

There is clearly much for Southgate to consider over the weekend, despite his belief that this latest performance represented "a step in the right direction".