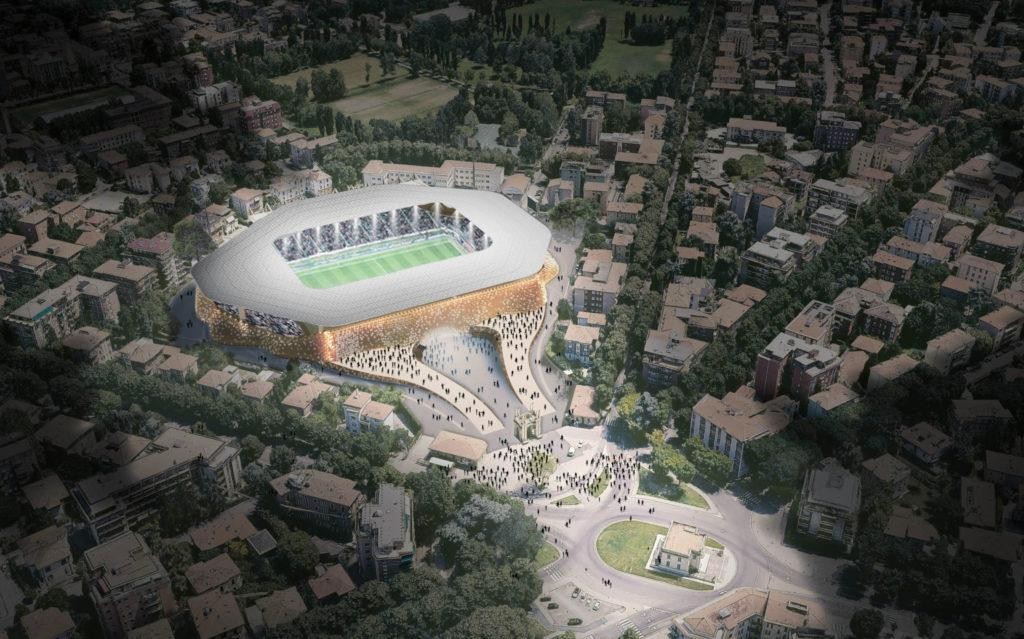 “A stadium for Parma, inspired by Parma.” Under this slogan, Parma Calcio 1913 unveiled their concept for an ambitious project for the redevelopment of the Stadio Tardini – which is the firm will of President Kyle Krause – with the desire to give the city, the Club and its fans a venue for the next generation.

The Crociati presented, via video, their vision for an innovative, inclusive, environmentally sustainable and multifunctional stadium to the city and the Club’s fans. Today was just the first step in anticipation of the finalisation of the true and proper project, which will be filed within a month. All of this goes hand in hand with constant dialogue between Parma Calcio and all parties involved: residents, fans, the authorities and organisations.

Using this fundamental idea-sharing process as an initial base – and never forgetting the history and tradition of the ducal city, Studio Zoppini has been able to draw up this first rendering of what the new Tardini will look like. In the coming weeks, the architecture studio, which was nominated by the Krause Group, will refine and finalise the project, always paying the utmost attention to the needs expressed by the Club, its fans and by the city.

The new Tardini will be a futuristic stadium, which will stand as an example of innovation for the decades to come. It shall be a multifunctional facility that may be used by the community throughout the whole week, not just on matchday. It will therefore provide a new home for Parma and its fans but also a multipurpose space for the entirety of the local community, who – via the survey done by Parma (and was brought up in the press conference by Arcadis’ Monica Pedrini) – have already expressed a favourable opinion towards the renovation of the stadium on the current grounds, furthermore underlining the importance that it should become a facility open throughout the week.

Parma Calcio’s investment displays, once again, just what Club President Kyle Krause means when he speaks of a long-term project. The new Tardini will be a fundamental aspect of city life and the life of the team over the coming century.

“Tardini Stadium has stood in its place for one hundred years, a proud symbol of Parma and its people.” declared Parma Calcio President Kyle Krause. “We recently began a journey to ensure that it remains here, reimagined and regenerated, for another century. The investment we are planning to make into the stadium is a significant one for Krause Group, and we are excited to share this vision with the people of Parma and calcio fans around the world. We aim to give the city of Parma a modern, multifunctional space that can be enjoyed by all, with the utmost attention being given to the needs of the neighborhood. I am proud of this project and I cannot wait to support the team in our new Tardini for many decades to come.”

“It’s an honour to be able to work in a city with such a great history and with a team as prestigious as Parma – and for an international group as well-renowned as the Krause Group,” said architect Alessandro Zoppini. “Our project will give life to a sustainable stadium with a unique atmosphere: a renovated home, in which the fans will be close to the action. The new Tardini, which is inspired by the past and the history of Parma yet projected to the future, will provide more than 20,000m2 of public spaces, open every day at the service of the community and, above all, the next generation, becoming a place of gathering and inclusion. Its unique and innovative nature will see it become a point of reference for future stadia and an icon for the city.”

“The process to get the new stadium, which has reached an important stage, will require the involvement of everybody: citizens and the various leaders in the city, Parma Calcio and the local government,” declared Mayor of Parma Federico Pizzarotti. “We have always maintained that the realisation of the new stadium ought to be a common journey with the Club and with local residents, and it will continue to be just that. The dream is to renovate the Tardini, integrating it even more into the local area and the city, and bring it to life through a project that falls completely under the banner of sustainability and environmental quality. I want to thank Parma Calcio and my fellow citizens; this is an alliance that benefits all of Parma.”

“After months of shared work, in which we have strongly desired to take the will of the local area onboard, a Tardini for everybody is beginning to take shape: modern, sustainable and inclusive,” said Vice Mayor Marco Bosi. “The Club has worked in the desired direction and I can only ever be pleased with that. There will be no further land reduction, a reduction of emissions, accessibility of all areas regardless of physical abilities, reduction of height, preservation of the Puccini school building, to name but a few. The redevelopment of the stadium is, above all, an important operation in terms of returning public spaces to Parma locals. I have to clarify that it will be a month until the project is officially lodged and we will use that time to the full to continue this dialogue with the city to accommodate any useful ideas for improvements. We will start this afternoon with the Council Commission.”