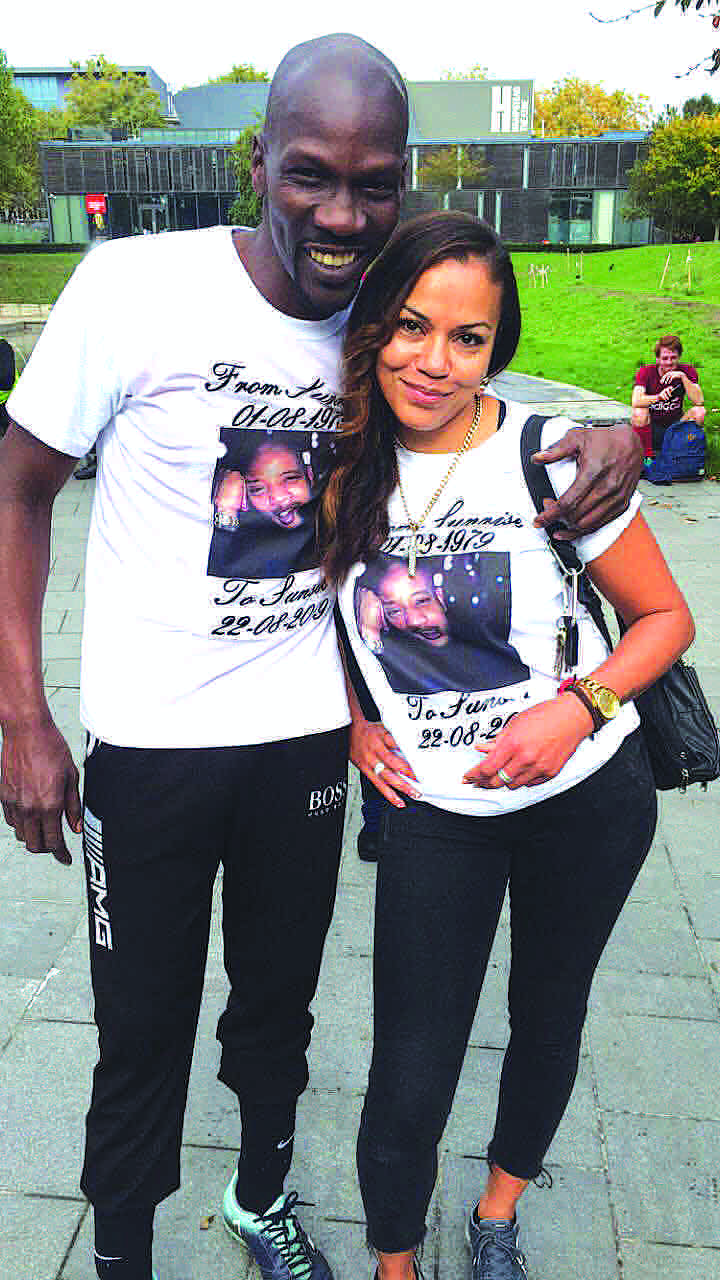 Friends and former teammates held a nostalgic, day-long football tournament in memory of Junior Agogo, the Ghana international who died suddenly during the summer.

They gathered on Sunday at the pitch in Swiss Cottage where it all began for Mr Agogo, close to the Taplow tower block where the striker lived.

And the captain of the first ever Winch Youth Club football team recalled how Junior got his big break.

Larry Bascoe said: “It was Sheffield Wednesday reserves against Barnsley and David Pleat [Wednesday’s then manager] was there watching. Junior was so naïve he was playing pro for the first time but he did one move – what was known then as the Romario move. He faked the cross, dragged the ball back across the guy and it nutmegged him, and then he whipped in the cross – all in one movement.”

He added: “And David Pleat just pointed right at him like this and said ‘Pro’. And that was it. I don’t forget that.”

Mr Bascoe was one of around 150 people to attend a lively memorial tournament for the 40-year-old.

After playing for Wednesday’s reserves Mr Agogo went on to play for Bristol Rovers, Nottingham Forest and QPR, as well as turning out for Ghana in the 2008 African Cup of Nations.

Mr Bascoe was part of a group that squatted the Winch building before it became a community centre. He was captain of the youth club football team and later set up his own semi-pro club from which Mr Agogo was scouted for Sheffield Wednesday.

On Sunday, a DJ played 1990s music and a nostalgic crowd reminisced about life in Swiss Cottage before the regeneration in 2004.

Another former pro Goran Crnobrnja, who lived in Winchester Road and grew up playing on the pitch, said: “I remember once we had stolen the keys from the sports centre, and we had the floodlights on 24/7. We were playing there until three in the morning most nights, until the police sussed it out and took the keys back off us.”

He added: “I could see the pitch from my bedroom. It was really heartbreaking when they took the pitch away, because we used to just be able to play when we wanted.”

A pitch was installed as part of the makeover of the area, but it is not as big as the one Mr Agogo and his friends used to kick about on.

Mr Crnobrnja, who played for Brentford and Portsmouth, added: “I don’t know how you are going to make pro players from London these days – because there are no pitches that young people can actually just go and play on.”

He recalled Junior coming back to Swiss Cottage in an expensive car after signing his first contract, adding: “He took me out into Mayfair with all the Premiership players. It was a nice thought for me to experience that. Now I see that’s all fake, that bullshit, but as a child it was nice to be around the players. It was inspiring for me.”

Jarzinho “Jazzy” Williams, who lived in Crossfield Road, said: “Even when he became a star, he had time for his boys. He would come down and buy us all Chinese food – he’d take us to the Golden Gardens on Finchley Road.”

Other players recalled how Junior could do “500 kick-ups” but was not as good as his best mate Paul Donnelly.

The tournament at the Winch was organised by Miowa Griffith – a former youth worker at the Winch – and some of Mr Agogo’s family. Former England striker Carlton Cole gave out the player of the tournament trophy after the event, which raised £800 for the Stroke Foundation.

Ms Griffith said raffle prizes donated by local businesses, including a signed Eden Hazard shirt, and an unused pair of Junior’s Nike football boots, would be auctioned off online for the charity next week. See The Winch’s website for details.