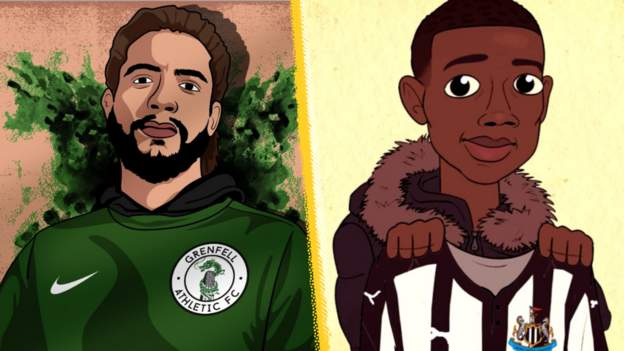 Footballer Jeremy Wisten killed himself after he was released by Manchester City, an inquest heard

Jeremy Wisten's death and inquest has focused more attention on the reality of Premier League academies and the stories of some of the thousands of young footballers who don't make it - as well as the 0.012% who do.

It's estimated that of the 1.5 million players who are playing organised youth football in England at any one time, around 180 will make it as a Premier League professional.

'It was horrible, I felt so alone' - being droppedThe brutal reality of Premier League academies: Deese Kasinga’s story

More than three-quarters of academy players are dropped between the ages of 13 and 16. In 2017, Deese Kasinga, who was playing at Newcastle United's academy, became one of those players.

"You think you're mentally prepared for it until you go into the office and it actually comes out of their mouth and they're like, 'we're not going to extend your contract' and reality hits you," Kasinga told BBC Sport.

Kasinga grew up in the Custom House area of Newham, east London - which he described as "a living war zone".

"[It's] as rough as you can get," he said. "I think most kids - especially boys - coming from the hood think that football is the only legal way out."

And Kasinga's future in football looked promising. In 2017, he made the Guardian's Next Generation list - alongside players such as Chelsea's Callum Hudson-Odoi - which featured '20 of the best talents/first-year scholars at Premier League clubs'.

When he was 16, he was offered a two-year scholar contract at Newcastle United, a category one academy - the highest status an academy can be.

Everything was going well for Kasinga when he moved up to Newcastle, until two serious injuries meant he was out for five months.

"I just remember being proper depressed," he said. "I didn't want to talk to my friends. I didn't even want to go into the training ground. It was just horrible. I felt so alone."

He says his physiotherapists helped him physically, but he felt he didn't get mental health support through the club - a claim disputed by Newcastle. A few weeks after he recovered and began playing again, he was released.

But some players find other paths to go down, and other ways to express themselves.

Tayshan Hayden-Smith, nicknamed 'the English Neymar' in his teenage years, had trials with several English football teams including Crystal Palace, Fulham and Watford.

Hayden-Smith told BBC Sport he "had a beautiful time" growing up playing football.

"It was my way of expressing myself and finding myself," he said.

He spent seven months on trial at Fulham, and joked about holding records for being on trial for the longest time at clubs. He was often told he was too short when he was let go from clubs.

He eventually went to play FC Kitzbuhel in the Austrian fourth tier, but flew home as soon as he could when he heard the news about the Grenfell Tower fire.

Hayden-Smith, who grew up right next to Grenfell and often played on a pitch in its shadow, later decided to stay in London, turning down a contract extension in Austria.

As a way of dealing with the trauma of the fire, Hayden-Smith found a new passion - guerrilla gardening, which he described as a form of activism.

"I found therapy in gardening. It was a very spontaneous, impulsive thing," he said.

He would go to local nurseries and pick up plants to create a garden out of them, which became the Grenfell garden of peace.

Now, he has his own non-profit organisation called Grow2Know, which focuses on empowering and inspiring young people through horticulture, while making it more inclusive.

What happens to young black footballers when they are released?

This picture is much bigger than simply what happens on the pitch.

Sports consultant Nyall Simms specialises in race, identity and mental wellbeing and is researching the support networks of young black athletes as they transition into professional sports.

His research has shown that for many young BAME players, the issue begins at school, where so many talented, young players are only given the support to succeed in sport. Once they are recognised as talented, he told BBC Sport, they can be "pigeon-holed into physical education" and "adopt a sporting-heavy identity".

Simms said: "Their education can suffer in a system that highlights the 'rags to riches' stories of sporting icons who are typically black. Ultimately this limits their career pathways greatly.

"That reinforces the notion that the only way you're only going to be celebrated is by playing football.

"When you look at society, the black males that are celebrated the most are athletes and rappers. You don't see many black mathematicians or scientists - because we're not shown them.

"In a society where some people of colour believe they have to work twice as hard as their white counterparts to be equal, having minimal qualifications when leaving an academy can leave the player disillusioned."

When 1% of academy players make it, it can be hard for players to imagine they would ever sign a professional contract. So what happens when you do?

Ben Johnson joined West Ham's academy at the age of seven. He told BBC Sport's MOTDx: "I didn't ever think I'd be a footballer. I was on the verge of release every time.

"I've seen so many players come and go. It's really tough to bounce back. I always knew I was a good player, but for some reason you get some coaches who may not see that."

But Johnson defied all odds, and signed his first professional contract when he was 18.

"The academy manager at the time, Terry Westley, he believed in me," he said. "I remember sitting in the meeting with my mum and [we thought] the worst. We didn't know what was going to happen.

"Thank God he said to me: 'You're going to be someone who surprises a lot of people.'

"I was in tears with my mum on the way back because we didn't expect it. Football can be wonderful but there are other sides of it which are extremely difficult."

In February 2019, Johnson made his Premier League debut for West Ham away to Manchester City.

In 2020, he scored his first goal for the Hammers against Brighton and Hove Albion and in 2021, he won the club's Young Player of the Season award after making 20 first-team appearances.

Just a few minutes away, in another part of east London, is a club called Hackney Wick FC.

They were founded in 2015 by Bobby Kasanga who realised there was no semi-professional team in the borough of Hackney. He wanted to give local players the opportunity to play semi-pro.

Many of the players who came to Hackney Wick had previously been released by academies.

"All of a sudden it was a reality check and they had to rebuild their careers," Kasanga said.

Their captain, Kyle Lynch, was at the Crystal Palace academy until 2018 and was then offered a scholarship after leaving school. He said being released was the hardest thing he has ever been through.

"I was worried about what I was going to do next," he said. "I felt like I let myself down, let [my parents] down."

As alone as these players feel when they are dropped, the fact is that thousands of them are experiencing the same thing.

On the same day in May 2019, Manchester United team-mates Marcus Rashford and Jesse Lingard posted the same cryptic message on Instagram.

It simply read '0.012%' and was a reference to those findings that only 180 of the 1.5 million boys playing organised youth football in England will ever play a single minute in the Premier League.

Oshor Williams, the assistant director of education for the Professional Footballers' Association, responsible for the union's support schemes and training to help players prepare for post-football life.

"Of all those entering the game aged 16, two years down the line, 50% of them will be outside professional football. If you look at the same cohort at 21, the attrition rate is 75% or higher.

"In the modern era, some of them may have been with the same club since the age of nine, then suddenly it is over. It must be like your parents asking you to leave home at the age of 18."

Williams also spoke about the loss of a footballing identity that players have had all their lives.

"It's hard to take," he said. "But there is a lot of work being done to make these young people realise their identity isn't locked up in their profession.

"Whatever their age, we never talk about having a 'Plan B' because it should just be 'the plan'. We don't call it a 'second career' either because if you phrase it like that to someone who is in a career - football - they may say 'well, that's not going to happen until I am 30'.

"The reality is it will probably happen long before that, whenever the phone stops ringing."