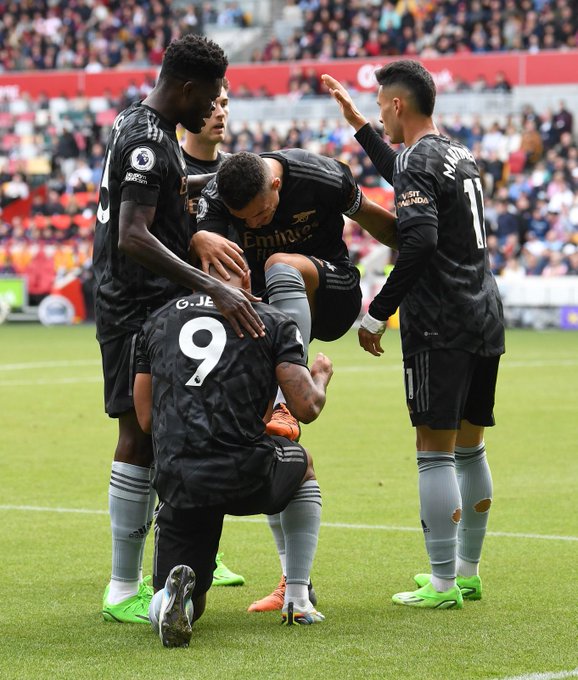 Arsenal supporters expressed their happiness after Thomas Partey made his return from injury to help Arsenal beat Brentford in the English Premier League.

Partey has been on the sidelines for past few weeks due to a thigh injury he suffered while in action against Bournemouth in August.

William Saliba set Arsenal on their way to a sixth win in seven top-flight games this season after the France defender climbed high to head Bukayo Saka’s corner in off the post.

It was 2-0 inside the opening half an hour as Brazil forward Jesus headed Granit Xhaka’s measured chip past David Raya.

Portuguese midfielder Fabio Vieira capped a dominant Arsenal display by marking his first Premier League start since joining from Porto with a goal from 25 yards.

The win puts the Gunners on 18 points, one more than their nearest rivals before their next match against Spurs in the north London derby at Emirates Stadium on October 1.

Partey lasted for 78 minutes before being replaced by Albert Sambi Lokonga.

Here are some comments from the fans:

Unruly King wrote: "Thomas Partey is the fuel that keeps Arsenal running. They break down without him always," Unruly King opened the debate on Twitter, while Mohammed Amali wrote: "Partey just settles this team so much. We are a completely different proposition with him."

Arsenal Ghana opined: "When Partey can take out three midfielders by himself, no wonder we struggle more without him... God protect him...🙏🏾," while Leo Dasilva joked: "I just really want Partey to get married," he said, adding: "Arsenal really need him for a full season."

"Partey easily bossing the midfield always gives Xhaka the confidence to move forward and express himself cos he’s a machine," said Buchi Laba adding: "Partey needs to be protected at all cost and with the injury to Mohamed Elneny making the situation worse."

Olayinka added: "There is that kind of assurance Partey gives Arsenal whenever he is in that midfield that no other player can replicate... only if he could stay fit."

"People won’t like admitting it but without Partey, this team is lost," wrote Asad🇵🇸 while ArsenHolic insisted for Arsenal to win the league, they need Partey to be fit: "We can all agree that Thomas Partey is the engine room for this Arsenal team," he said.

ArsenHolic added: "We need a fully fit Partey for this entire season and we are talking about being crowned the EPL champions."

Partey has been named in Ghana's squad to face Brazil and Nicaragua ahead of the international friendlies.