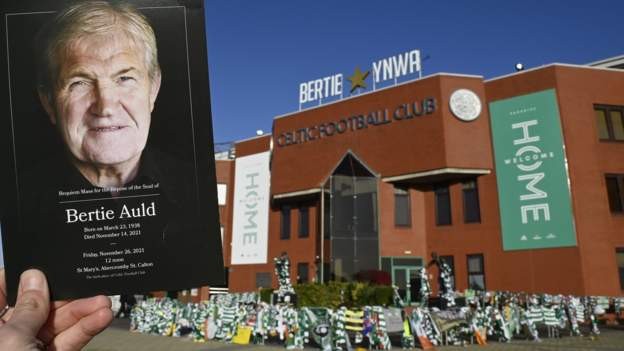 Bertie Auld was described as one of "the greatest ambassadors Celtic could ever have wished for" as thousands turned out to honour the Lisbon Lion.

Auld's funeral mass was held at St Mary's church in Calton, Glasgow, and shown on big screens at Celtic Park.

The cortege then made its way to the stadium, where thousands of fans had gathered and the Celtic Song rang out.

Part of Celtic's 1967 European Cup-winning team in Lisbon, Auld died aged 83 after a battle with dementia.

Former managers Neil Lennon and Brendan Rodgers and current incumbent Ange Postecoglou and his squad were among those who joined Auld's family, including wife Liz and children Robert and Susan.

Fighting back tears, Craig said: "Bertie Auld was a great Celt and, equally importantly, a very nice man. May he rest in peace."

"It was a European Cup final, our biggest match of the season, and, like me, I suspect everyone was a bit on the apprehensive side," said Craig.

"I have always thought Bertie noticed this and immediately raised his voice and launched into the Celtic Song. After a minute or two, we all joined in and it certainly helped us to cope with the big occasion.

"The Inter guys were less impressed. From the looks on their faces, I always thought that their reaction was, 'what the blazes is this we are playing?' They would soon know."

Former Celtic manager Brendan Rodgers, left, was among the mourners'Their bond was a joy to behold'

"It was during this period that I realised what great friendship was. His love for Jinky was immeasurable. In the last 18 months of the wee man's life, Bertie visited him every single day. The bond that they had was a joy to behold.

"When Tommy Gemmell was taken ill and went into a nursing home, Bertie went to see him every single day. He had big Tam laughing and joking right to the very end.

"Bertie adored being a Lisbon Lion because he believed that kept him connected to the club forever. He was certainly right about that.

"Over the past 50 years, Tommy Burns and Bertie Auld are the two greatest ambassadors that Celtic Football Club could ever have wished for.

"Since Tommy's passing, Bertie has carried the baton himself. He travelled far and wide to attend Celtic supporter events. He drove thousands of miles across the UK and Ireland. He never let anyone down."