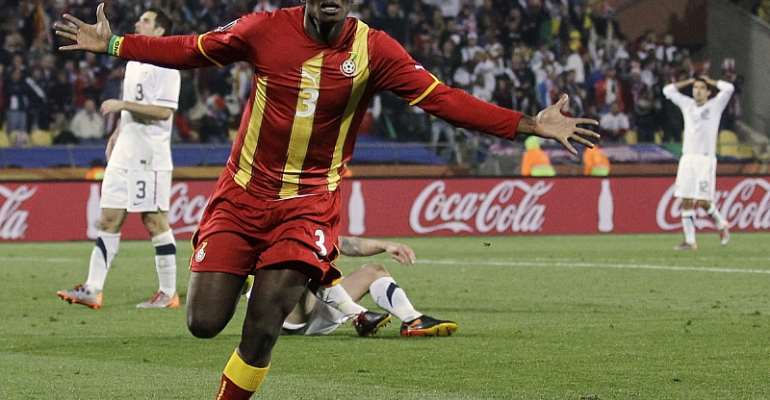 Ghana became only the third African side to reach the quarter-final stage at a World Cup after Asamoah Gyan smashed home an extra-time winner to knock out the USA.

The Black Stars, the only remaining African team in the tournament, have emulated Cameroon in 1990 and Senegal in 2002, and will play Uruguay at Soccer City on 2 July.

Ghana, who defeated the USA 2-1 in a crucial group match at the 2006 World Cup, appeared to have the measure of Bob Bradley's team after Kevin-Prince Boateng gave them an early lead in Rustenburg with a low strike.

But the Americans came back strongly after the break and equalised through a Landon Donovan penalty.

They seemed the most likely winners of a contest that had seen Ghana lose the drive and purpose that characterised their first-half play.

Ghana had not scored twice in a match in 2010 and both their previous goals in South Africa had come from the penalty spot, but they were the superior team in extra-time and survived some nervous final moments to seal a famous win.

Milovan Rajevac's team, playing a 4-2-3-1 system and showing incredible strength and desire, dominated the opening half to the extent that US midfielder Ricardo Clark was substituted after just 30 minutes.

The Black Stars goal after five minutes was partly the fault of the unfortunate Clark, who had his pocket picked by Boateng deep in his own half.

The Portsmouth midfielder, who made several telling runs from deep positions before fading after the break, closed in on goal before delivering a low left-foot strike from 18 yards that Tim Howard might feel he ought to have saved.

The US, who won their group, continued to create problems of their own making, with Jay DeMerit allowing a long kick downfield from Richard Kingson to reach Kwadwo Asamoah, whose low strike was brilliantly saved by Howard.

Former US president Bill Clinton watched from the stands as Ghana, sporting a distinct red and yellow striped strip, smothered their opposition, who struggled to retain possession.

But Michael Bradley did get in behind once during the opening half, while a mistake by the uncertain Jonathan Mensah resulted in Clint Dempsey playing in Robbie Findlay, but the striker's shot was well saved.

Coach Bradley had been decisive in his withdrawal of Clark and replaced striker Findley with midfield Benny Feilhaber at the break, pushing Dempsey into a more advanced position.

It was a decision that almost paid instant dividends when the substitute was played through, but a heavy first touch allowed Kingson to advance from his goal and block Feilhaber's subsequent shot.

Donovan's equaliser from the spot went in off the post after Jonathan Mensah ended Dempsey's surging run into the box with a late and clumsy challenge.

Ghana had gone completely off the boil and might have fallen behind when a ball over the top caught out their high line of defence but Kingson, who had an excellent game, was again quickly off his line to deny Jozy Altidore and, later, a low strike from Bradley.

Altidore tussled with John Mensah as Ghana struggled to deal with a long ball - and despite going to ground the US striker almost scored with a low strike.

The Americans profligacy was punished in the third minute of extra-time when Gyan showed strength and composure to control a long ball forward with his chest and bury his strike from a wide angle despite the close proximity of two defenders.