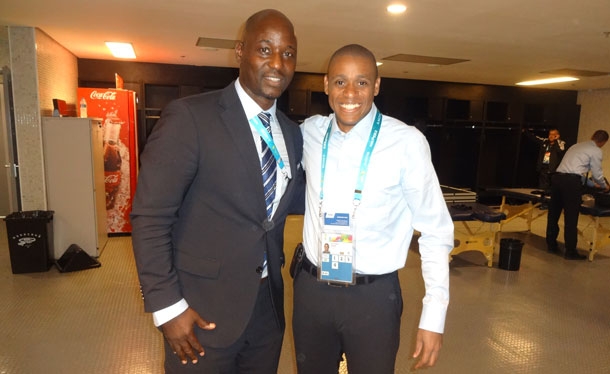 Ghana legend Tony Baffoe has asked Asamoah Gyan to help Bernard Mensah to settle and excel at Kayserispor after the latter joined the striker at the Turkish club.

Mensah completed a move to Turkish side Kayserispor on Monday on a season long loan to join his fellow countryman Gyan at the Lig 1 outfit.

The 23-year-old joined Kayserispor on a loan deal from Spanish side Atletico Madrid to join Gyan who is an established figure at the club.

Mensah's impressive performances caught the attention of several top clubs but it's Kayserispor who have acted swiftly to acquire the Ghanaian on a season long loan.

Mensah, who has scored one goal in five Ghana appearances, has now joined the Ghana captain at the club which has attracted Baffoe to ask Gyan to help the youngster out.

"Good luck @oliver_mens of playing with the Captain @ASAMOAH_GYAN3 please take care of him??, " Baffoe wrote.

Good luck @oliver_mens of playing with the Captain @ASAMOAH_GYAN3 please take care of him?? https://t.co/8qh6MYPhWW

Mensah joined Atletico Madrid on a six-year deal two seasons ago but failed to establish himself in the side which saw him spending time on loan at Getafe and Vitória Guimarães.

The highly skilled-enforcer was again shipped on loan to Kasimpasa on a season long loan at the start of the just ended Turkish SuperLiga campaign.